Manchester is in the northwest region of England, about equidistant between Liverpool and Leeds. Although it has the image of being very wet the rainfall and number of rainy days in Manchester are less than the UK average.

Manchester once had a negative reputation derived from its industrial past. Things have dramatically changed in the last decade and now the city has a vibrant, exciting air. Investment in the city's regeneration following the 1996 IRA bomb and 2002 Commonwealth Games has paid off and Manchester is well worth a visit, even if just for a couple of days, or for longer, if you plan to use it as a base to explore northern England and North Wales.

Manchester is becoming more and more a city where people are choosing to settle. It is seen by many as young, vibrant and cutting edge city, where there is always something happening. Many see their city as a rival to London, albeit on a more human scale; nevermind the ongoing battle with Birmingham for "The Second City" title. This feud seems to go on and on and hinges, at least in population size, on how you add up the numbers. If you compare Greater Manchester's population to Birmingham's and its neighbouring towns and districts, Birmingham pips Manchester to the post by a 100 000 or so. However if you look at the actual population of the city of Birmingham, which is more than 1 million, it is more than twice as big, in terms of population, as the actual city of Manchester which has a population of around 450 000 people. But the city argues that population is just one aspect and that history and contributions to the world should also be considered. The "Manchester brand" is seen to extend well beyond the city's boundaries (covering all of neighbouring Salford & Trafford, as well as districts of other boroughs) and even beyond those of Greater Manchester. This serves to reflect the influence it has on the wider region as a whole.

Over the years, many have moved to Manchester from London. These people are by no means all returning to their northern roots. Some are from overseas, who stopped off down south on their way north in search of a more affordable urban existence. Manchester is a friendly city as well. Northerners do talk to each other and to strangers. Just compare asking for directions in London and Manchester and the difference is often clear. Of late, locals seem more proud than ever of Manchester and all it offers. Some outsiders may find this fierce pride in their city somewhat "un-British," but it is very similar to that of Australians in their country. Positive comments and praise go down a treat with the locals, and with all that has happened in recent years, such is often due.

Manchester was the site of the Roman Fort Mamucium (breast-shaped) in AD 79 but a town was not built until the 13th Century. The old Roman road that ran to the nearby fort of Coccium (Wigan) is mirrored today by the route through Atherton & Tyldesley. A priests' college and church (now Chetham's School and Library and the Cathedral) were established in Manchester in 1421. Early evidence of its tendency towards political radicalism was its support for Parliament during the Civil War and in 1745 for the Jacobite forces of the Young Pretender.

It was not until the start of the Industrial Revolution of the 18th and 19th Centuries that this small mediaeval town would build its fortune. The presence of an existing cloth trade, coupled with the mechanisation of spinning in nearby Bolton, created a thriving cotton industry in Manchester. The damp, humid atmosphere was good for cotton spinning since it meant less broken threads and cut down on the risk of explosions from cotton dust. Water power rapidly gave way here to steam invented by Boulton and Watt and a steam-driven factory was built in the Ancoats Northern Quarter section of the city. By the end of the 19th Century, Manchester was one of the 10 biggest urban centres on earth (even before counting the wider population, within 50 miles of the Northern England region, such as Liverpool, Sheffield, Bradford, Leeds, and Central Lancashire ).

Whitworth, inventor of the eponymous mass-cut screw thread, also manufactured his equally revolutionary rifled guns in huge quantities at his factory on Sackville Street. After their initial meeting at the Midland Hotel, still one of the city's most luxurious, Rolls and Royce began manufacture of their luxury motor cars in Hulme.

Trafford Park, in Trafford, was to become the first industrial estate in the world, housing the Ford Motor Company and much of the pre-wartime aircraft industry, notably the 'Lancaster' Bombers of the AVRO Co.

Manchester's success during the Victorian era and before is evident everywhere you look. Great Ancoats Street was a source of wonder to Schinkel, the neo-classical architect from Berlin. Equally grandiose neo-Gothic buildings line the old Financial District around King Street, and public institutions such as the University and the many libraries are dotted around everywhere. There is even a statue of Abraham Lincoln in Lincoln Square (Brazennose Street, straight across Albert Square from the Town Hall main entrance) commemorating his personal thanks for Manchester's support during a cotton famine created by Britain's refusal to run the Federal blockade of the slave-owning Confederacy during the American Civil War.

Continuing its radical political tradition, Manchester was the home of opposition to the Corn Laws and espoused Free Trade, as well as Chartism and the Great Reform Act. It was instrumental in the establishment of socialism in the UK. Both Engels and Marx frequented the city; the former conducted his famous inquiry into the condition of the working class, and the latter sought to draw universal rules from the particular circumstances of the early industrial revolution, with disastrous consequences in the 20th century. Cleaving to a more gently pragmatic English tradition it was the birthplace of the Trades Union Congress which led to the creation of the Labour Party. It was also home to a number of philanthropists of the industrial age, such as John Owens and John Dalton, who bequeathed large parts of their fortunes to improving the city.

In more recent times, Manchester has been famous for its influence on the UK music scene. The Madchester movement of the early 1980s, started by Factory Records and Joy Division, led to the creation of the Haçienda nightclub (now unfortunately demolished after standing empty for many years) and the birth of modern club culture. Manchester has given life to many hugely successful musicians, among them The Stone Roses, The Smiths, The Fall, Joy Division/New Order, The Happy Mondays, Oasis, James, and Badly Drawn Boy.

At 11:20, on Saturday, 15 June 1996, Manchester's city centre was rocked by a huge 1500 kg IRA bomb blast. Although preliminary intelligence managed to clear people from the scene enough for there to be no fatalities, the very heart of the city was ripped to shreds. A huge amount of money and effort was put into regenerating this bomb damaged part of the centre, redubbed the Millennium Quarter. The area has renewed interest in the centre and contains the entertainment and shopping heart of the city. 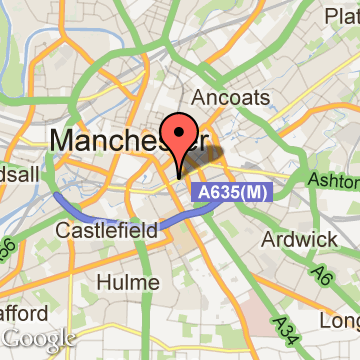