Lichfield is a city and civil parish in Staffordshire, England. One of seven civil parishes with city status in England, Lichfield has a population of 31,000 & is situated 16 miles north of Birmingham and 124 miles northwest of London.

Lichfield is notable for its three-spired cathedral and as the birthplace of Dr. Johnson, the writer of the first authoritative Dictionary of the English Language. A Dictionary of the English Language, one of the most influential dictionaries in the history of the English language, was prepared by Samuel Johnson and published on April 15, 1755. Lichfield is also the birthplace of Elias Ashmole (23 May 1617 – 18 May 1692). Elias was a celebrated English antiquary, politician, officer of arms, astrologer and student of alchemy. He supported the royalist side during the English Civil War, and at the restoration of Charles II he was rewarded with several lucrative offices. Throughout his life he was an avid collector of curiosities and other artifacts. Many of these he acquired from the traveller, botanist, and collector John Tradescant the Younger. Ashmole donated most of his collection, his antiquarian library and priceless manuscripts to the University of Oxford to create the Ashmolean Museum. Today Lichfield still retains its old importance as an ecclesiastical centre, but its industrial and commercial development has been relatively small; the centre of the city thus retains an essentially old-world character, with pockets of historic charm.

The earliest evidence of settlement has been the discovery of Mesolithic flints on the high ground of St Michael’s churchyard, which may indicate an early flint industry. Traces of Neolithic settlement have been discovered on the south side of the sandstone ridge occupied by the Cathedral.

3.5 km (2.2 mi) south west of Lichfield, near the point where Ryknild Street crosses Watling Street, was the site of the Roman town of Letocetum. Established in 50 as a military fortress, by the 2nd century it had become a civilian settlement with a bath house and a mansio. Letocetum fell into decline by the 4th century and the Romans had left by the 5th century. There have been scattered Romano-British finds in Lichfield, and it is possible that a burial discovered beneath the cathedral in 1751 was Romano-British. There is no evidence of what happened to Letocetum after the Romans left; however Lichfield may have emerged as the inhabitants of Letocetum relocated during its decline.

The early history of Lichfield is obscure. The first authentic record of Lichfield occurs in Bede's history, where it is called Licidfelth and mentioned as the place where St Chad fixed the episcopal see of the Mercians in 669. The first Christian king of Mercia, King Wulfhere donated land at Lichfield for Chad to build a monastery. It was because of this that the ecclesiastical centre of the Diocese of Mercia became settled at Lichfield, which was approximately 7 miles (11 km) north-west of the seat of the Mercian kings at Tamworth. The first cathedral was built on the present site in 700 when Bishop Hedda built a new church to house the bones of St Chad, which had become a sacred shrine to many pilgrims when he died in 672. The burial in the cathedral of the kings of Mercia, King Wulfhere in 674 and King Ceolred in 716, further increased the prestige of Lichfield. In 786 Offa, King of Mercia, raised Lichfield to the dignity of an archbishopric, with authority over all the bishops from the Humber to the Thames. However after King Offa's death in 796, Lichfield's power waned and in 803 the primacy was restored to Canterbury by Pope Leo III after only 16 years. The Historia Britonum lists the city as one of the 28 cities of Britain around AD 833.

During the 9th century, the Kingdom of Mercia was devastated by the Vikings from Denmark. Lichfield itself was unwalled and the cathedral was despoiled, so Bishop Peter moved the see to the fortified and wealthier Chester in 1075. His successor, Robert de Limesey, transferred it to Coventry, but it was eventually restored to Lichfield in 1148. Work began on the present Gothic cathedral in 1195. At the time of the Domesday survey, Lichfield was held by the bishop of Chester, where the see of the bishopric had been moved 10 years earlier; Lichfield was listed as a small village. The lord of the manor was the bishop of Chester until the reign of Edward VI.

Bishop Clinton was responsible for transforming the scattered settlements to the south of Minster Pool into the ladder plan streets we recognise today. Market Street, Wade Street, Bore Street and Frog Lane linked Dam Street, Conduit Street and Bakers Lane on one side with Bird Street and St John Street on the other. Bishop Clinton also fortified the cathedral close and enclosed the town with a bank and ditch, and gates were set up where roads into the town crossed the ditch. In 1291 Lichfield was severely damaged by a fire which destroyed most of the town; however the Cathedral and Close survived unscathed. In 1387 Richard II gave a charter for the foundation of the gild of St Mary and St John the Baptist; this gild functioned as the local government, until its dissolution by Edward VI, who incorporated the town in 1548.

Henry VIII had a dramatic effect on Lichfield. The Reformation brought the disappearance of pilgrim traffic following the destruction of St Chad's shrine in 1538 which was a major loss to the city's economic prosperity. That year too the Franciscan Friary was dissolved, the site becoming a private estate. Further economic decline followed the outbreak of plague in 1593, which resulted in the death of over a third of the entire population.

Three people were burned at the stake for heresy under Mary I. The last public burning at the stake in England took place in Lichfield, when Edward Wightman from Burton upon Trent was executed by burning in the Market Place on 11 April 1612 for his activities promoting himself as the divine Paraclete and Saviour of the world. In the English Civil War, Lichfield was divided. The cathedral authorities, with a certain following, were for the king, but the townsfolk generally sided with the Parliament. This led to the fortification of the close in 1643. Lichfield's position as a focus of supply routes had an important strategic significance during the war, and both forces were anxious for control of the city. Lord Brooke, notorious for his hostility to the church, led an assault against it, but was killed by a deflected bullet on St Chad's day, an accident welcomed as a miracle by the Royalists. The close yielded and was retaken by Prince Rupert of the Rhine in this year; but on the breakdown of the king's cause in 1646 it again surrendered. The cathedral suffered extensive damage from the war, including the complete destruction of the central spire. It was restored at the Restoration under the supervision of Bishop Hacket, and thanks in part to the generosity of King Charles II

Lichfield started to develop a lively coaching trade as a stop-off on the busy route between London and Chester from the 1650s onwards, making it Staffordshire's most prosperous town. In the 18th century, and reaching its peak in the period from 1800—1840, the city thrived as a busy coaching city on the main routes from London to the north-west and Birmingham to the north-east. It also became a centre of great intellectual activity, being the home of many famous people including Samuel Johnson, David Garrick, Erasmus Darwin and Anna Seward; this prompted Johnson's remark that Lichfield was "a city of philosophers". In the 1720s Daniel Defoe described Lichfield as 'a fine, neat, well-built, and indifferent large city', the principal town in the region after Chester. During the late 18th and early 19th century much of the medieval city was rebuilt with the red brick Georgian style buildings we see today. Also during this time the city underwent vast improvements with underground sewerage systems, paved streets and gas powered street lighting. An infantry regiment of the British Army was formed at Lichfield in 1705 by Col. Luke Lillingstone in the King's Head pub in Bird Street. In 1751 it became the 38th Regiment of Foot and in 1783 the 1st Staffordshire Regiment; after reorganization in 1881 it became the 1st battalion of the South Staffordshire Regiment. 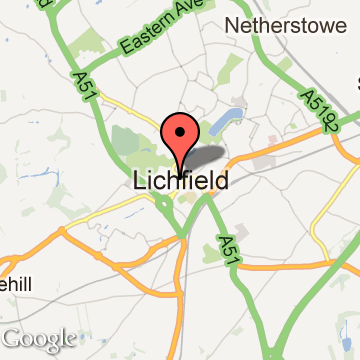