Canterbury  is a historic English cathedral city, which lies at the heart of the City of Canterbury, a district of Kent in South East England. It lies on the River Stour.

Originally a Brythonic settlement called *Durou̯ernon (composed of the ancient British roots *duro- "stronghold", *u̯erno- "alder tree"), it was renamed Durovernum Cantiacorum by the Roman conquerors in the 1st century AD. After it became the chief Jutish settlement, it gained its English name Canterbury, itself derived from the Old English Cantwareburh ("Kent people's stronghold"). After the Kingdom of Kent's conversion to Christianity in 597, St Augustine founded an episcopal see in the city and became the first Archbishop of Canterbury, a position that now heads the Church of England and the worldwide Anglican Communion (though the modern-day Province of Canterbury covers the entire south of England). Thomas Becket's murder at Canterbury Cathedral in 1170 led to the cathedral becoming a place of pilgrimage for Christians worldwide. This pilgrimage provided the theme for Geoffrey Chaucer's 14th-century literary classic The Canterbury Tales. The literary heritage continued with the birth of the playwright Christopher Marlowe in the city in the 16th century. .

Parts of the city have been designated a UNESCO World Heritage Site. Many historical structures remain, including a city wall founded in Roman times and rebuilt in the 14th century, the ruins of St Augustine's Abbey and a Norman castle, and perhaps the oldest school in England, The King's School. Modern additions include the University of Kent, Canterbury Christ Church University, the University College for the Creative Arts, the Marlowe Theatre, and the St Lawrence Ground, home to Kent County Cricket Club. The city lies at the heart of the City of Canterbury, a local government district.

Canterbury is a popular tourist destination: consistently one of the most-visited cities in the United Kingdom, the city's economy is heavily reliant upon tourism. There is also a substantial student population, brought about by the presence of three universities. Canterbury is, however, a relatively small city, when compared with other British cities.

The Canterbury area has been inhabited since prehistoric times. Lower Paleolithic axes, and Neolithic and Bronze Age pots have been found in the area. Canterbury was first recorded as the main settlement of the Celtic tribe, the Cantiaci, which inhabited most of modern day Kent. In the 1st century AD, the Romans captured the settlement, and named it Durovernum Cantiacorum, meaning "stronghold of the Cantiaci by the alder grove". The Romans rebuilt the city, with new streets in a grid pattern, a theatre, a temple, a forum and public baths. In the late 3rd century, to defend against attack from barbarians, the Romans built around the city an earth bank and a wall with seven gates, which enclosed an area of 130 acres (53 ha).

After the Romans left Britain in 410 AD, Durovernum Cantiacorum was abandoned, apart from a few farmers, and gradually decayed. Over the next 100 years, an Anglo-Saxon community formed within the city walls, as Jutish refugees arrived, possibly intermarrying with the locals. The Jutes named the city Cantwaraburh, meaning "Kent people's stronghold". In 597 AD, Pope Gregory the Great sent Augustine to convert King Æthelberht of Kent to Christianity. After the conversion, Canterbury, as a Roman town, was chosen by Augustine as the centre for an episcopal see in Kent, and an abbey and cathedral were built. Augustine thus became the first Archbishop of Canterbury. The town's new importance led to its revival, and trades developed in pottery, textiles and leather. By 630, gold coins were being struck at the Canterbury mint. In 672 the Synod of Hertford gave the see of Canterbury authority over the entire English Church.

In 842 and 851, Canterbury suffered great loss of life during Danish raids. In 978, Archbishop Dunstan refounded the abbey built by Augustine, and named it St Augustine's Abbey. A second wave of Danish attacks began in 991, and in 1011 the cathedral was burnt and Archbishop Alphege was killed. Remembering the destruction caused by the Danes, the inhabitants of Canterbury did not resist William the Conqueror's invasion in 1066. William immediately ordered a wooden motte-and-bailey castle to be built by the Roman city wall. In the early 12th century, the castle was rebuilt with stone.

After the murder of Archbishop Thomas Becket at the cathedral in 1170, Canterbury became one of the most notable towns in Europe, as pilgrims from all parts of Christendom came to visit his shrine. This pilgrimage provided the framework for Geoffrey Chaucer's 14th-century collection of stories, The Canterbury Tales. 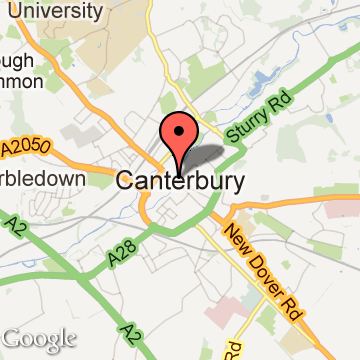