Kingston upon Hull  frequently referred to as Hull, is a city and unitary authority area in the ceremonial county of the East Riding of Yorkshire, England. It stands on the River Hull at its junction with the Humber estuary, 25 miles (40 km) inland from the North Sea. Hull has a resident population of 256,400 (2011 est.). The Larger Urban Zone (LUZ) population stands at 573,300.

Renamed Kings town upon Hull by King Edward I in 1299, the town and city of Hull has served as market town, military supply port, a trading hub, fishing and whaling centre, and industrial metropolis.

Hull was an early theatre of battle in the English Civil Wars. Its 18th-century Member of Parliament, William Wilberforce, played a key role in the abolition of the slave trade in Britain.

The city is unique in the UK in having had a municipally-owned telephone system from 1902, sporting cream, not red, telephone boxes.

After suffering heavy damage during the Second World War (the 'Hull Blitz'), Hull weathered a period of post-industrial decline, during which the city gained unfavourable results on measures of social deprivation, education and policing. During the early 21st century spending boom prior to the late 2000s recession the city saw large amounts of new retail, commercial, housing and public service construction spending.

Established tourist attractions include the historic Old Town and Museum Quarter, Hull Marina and The Deep, a city landmark. The redevelopment of one of Hull's main thoroughfares, Ferensway, included the opening of St. Stephen's Hull and the new Hull Truck Theatre. Spectator sporting activities include professional football and two rugby league clubs. The KC Stadium houses the football club and one rugby club.

Must See Places in Kingston upon Hull, United Kingdom

A settlement called Myton, although not listed in the Domesday book of 1086, existed at the confluence of the River Hull and Humber in the 11th century. In the late 12th century the monks of the nearby Meaux Abbey created the new town of Wyke, from the Scandinavian meaning creek (i.e. the River Hull). The town of Wyke would later become Hull. Both the names Myton and Wyke remain as political ward areas of the city.

With the River Hull offering a harbour for the import and export of goods, and the Humber estuary being connected to other major rivers, the town of Wyke upon Hull became established and thrived. This situation drew the attention of the town to King Edward 1 who visited, and eventually granted Kyngeston (or King's Town) upon Hull its Royal Charter on April 1st 1299. The lay of the main roads to and from the city are the result Edward's involvement. The interest of various Kings including Henry VIII have had a bearing on what the visitor, with a little understanding, may see when visiting the city. Hull's importance as a port, and in its early years as an arsenal, at one time second only to London's arsenal, caused walls with battlements and towers to be initiated in 1327, blockhouses on the east bank of the River Hull in 1542 and a citadel, again on the east bank, in 1681. Although all these have long gone, their imprint on the old town along with the subsequent docks, can still be appreciated.

In some ways the 20th century was the most consistently calamitous era in the long, long history of this great maritime city. From a peak in prosperity at the start of the 1900s, with industrial and mercantile might that placed it on a level with almost any other city in the land, by the last decade of the century its litany of hard luck stories had cruelly conspired to turn Hull into a nationally perceived shadow of its former self. The last hundred years were, however, a sad chapter in an epic story, and at the birth of a new century, the place Larkin called the 'lonely northern daughter' has begun to miraculously revive and stake its claim for prosperity and respect once more.

Much investment is being directed into the city, encouraged by the huge success of The Deep as a centre-piece major visitor attraction, a sprucing up of the Old Town, and new retail offers. To the visitor, the face of Hull has almost been altered beyond recognition with the redevelopment of Ferensway, and the construction of the landmark St Stephen's centre, Hull's premier shopping experience. This comprises a shopping mall with upmarket chains, a modern hotel, the newly opened Hull Truck Theatre building, and a music learning centre for young people. The visitor experience has been much improved with the redevelopment of Hull Paragon Interchange with a new bus station and refurbished railway station. New developments planned include a new footbridge over the River Hull.

Anybody who has experienced the city first-hand without any preconceived notions or bias, will tell you that Hull is unique. It is no longer isolated, as transport links with the rest of the country are more than adequate. This was not the case for hundreds of years though, and the result is a true one-off. The place has a genuine cultural identity and character of its own. It is reflected in the accent (pronounce "oh no" as "er ner" and you will have an idea), the humour, the self-effacement and spirit of its people. Hull's colourful (at times startling) but always fascinating urban fabric and history are its markers.

The flat landscape and low but often breathtaking historic buildings, give a sense of there being a massive backdrop of sky, and when combined with a view out to the brooding, bleak, mighty expanse of the Humber Estuary from the point at which it converges with the River Hull, it becomes apparent that there is something special in the location of the town.

Along with the poetry of its setting, Hull has a formidable connection with some of the most influential poets in English literature. Amongst others, Andrew Marvell was baptized in Holy Trinity Church and attended the Old Grammar School. Coventry-born poet and University of Hull Librarian Philip Larkin lived at 32 Pearson Park for most of his life, and Stevie Smith was born in Hull. In the second half of 2010, Hull celebrated Larkin's life and verse with the Larkin25 events including poetry readings, a Larkin tourist trail and a 'Plague of Toads' sculpture trail recalling Larkin's poem, 'Toads'. A statue of Larkin has been unveiled at Paragon Interchange.

The city has in recent years branded itself as the "Pioneering City", and this claim is backed up by a list of many firsts originating on Humberside. The technology for Liquid Crystal Display (LCD), for example, was discovered and refined at the University of Hull in the late 1960s. The city is also a UK leader in the development of broadband and telecom technology.

In 2007 Kingston-Upon-Hull celebrated another of its numerous remarkable achievements when it commemorated the life of its greatest son William Wilberforce  and celebrated his starring role in the abolition of the British slave trade which in turn changed the face of world history. There was a wide range of events across the city. 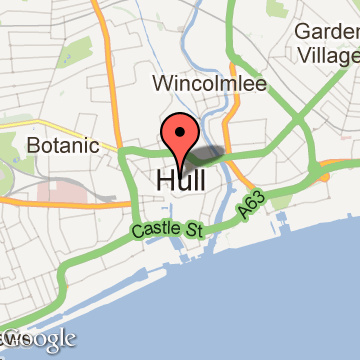