Chester  is a city in Cheshire, England. Lying on the River Dee, close to the border with Wales, it is home to 118,925 inhabitants, and is the largest and most populous settlement of the wider unitary authority area of Cheshire West and Chester, which had a population of 328,100 according to the 2001 Census. Chester was granted city status in 1541.

Chester was founded as a "castrum" or Roman fort with the name Deva Victrix in the year 79 by the Roman Legio II Adiutrix during the reign of the Emperor Vespasian. Chester's four main roads, Eastgate, Northgate, Watergate and Bridge, follow routes laid out at this time – almost 2,000 years ago. One of the three main Roman army bases, Deva later became a major settlement in the Roman province of Britannia. After the Romans left in the 5th century, the Saxons fortified the town against the Danes and gave Chester its name. The patron saint of Chester, Werburgh, is buried in Chester Cathedral.

Chester was one of the last towns in England to fall to the Normans in the Norman conquest of England. William the Conqueror ordered the construction of a castle, to dominate the town and the nearby Welsh border. In 1071 he made Hugh d'Avranches the first Earl of Chester.

Chester has a number of medieval buildings, but some of the black-and-white buildings within the city centre are actually Victorian restorations. Chester is one of the best preserved walled cities in Britain. Apart from a 100-metre (330 ft) section, the listed Grade I walls are almost complete.

The Industrial Revolution brought railways, canals, and new roads to the city, which saw substantial expansion and development – Chester Town Hall and the Grosvenor Museum are examples of Victorian architecture from this period.

he Romans founded Chester as Deva Victrix in the 70s AD in the land of the Celtic Cornovii, according to ancient cartographer Ptolemy, as a fortress during the Roman expansion northward. It was named Deva either after the goddess of the Dee, or directly from the British name for the river. The 'victrix' part of the name was taken from the title of the Legio XX Valeria Victrix which was based at Deva. A civilian settlement grew around the military base, probably originating from trade with the fortress. The fortress was 20% larger than other fortresses in Britannia built around the same time at York (Eboracum) and Caerleon (Isca Augusta); this has led to the suggestion that the fortress, rather than London (Londinium), was intended to become the capital of the Roman province of Britannia Superior. The civilian amphitheatre, which was built in the 1st century, could seat between 8,000 and 10,000 people. It is the largest known military amphitheatre in Britain, and is also a Scheduled Monument. The Minerva Shrine in the Roman quarry is the only rock cut Roman shrine still in situ in Britain. The fortress was garrisoned by the legion until at least the late 4th century. Although the army had abandoned the fortress by 410 when the Romans retreated from Britannia, the Romano-British civilian settlement continued (probably with some Roman veterans staying behind with their wives and children) and its occupants probably continued to use the fortress and its defences as protection from raiders from the Irish Sea.

Chester was captured from the Britons by the Kingdom of Northumbria after the brutal and decisive Battle of Chester in the early 7th century. Deverdoeu was still one of two Welsh language names for Chester in the late 12th century; its other and more enduring Welsh name was Caerlleon, literally "the fortress-city of the legions", a name identical with that of the Roman fortress at the other end of the Welsh Marches at Caerleon in Monmouthshire, namely Isca Augusta. The modern Welsh name is the shortened form, Caer. The early Old English speaking Anglo Saxon settlers used a name which had the same meaning, Legacæstir, which was current until the 11th century, when, in a further parallel with Welsh usage, the first element fell out of use and the simplex name Chester emerged. From the 14th century to the 18th century the city's prominent position in North West England meant that it was commonly also known as Westchester. This name was used by Celia Fiennes when she visited the city in 1698. 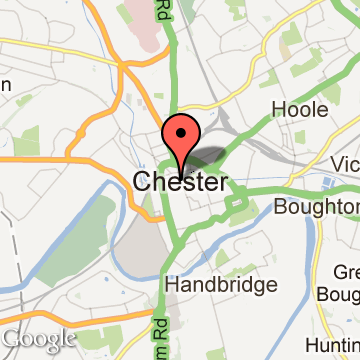