Durham  is a city in north east England. It is within the County Durham local government district, and is the county town of the larger ceremonial county. It lies to the south of Newcastle upon Tyne, Chester-le-Street and Sunderland and to the north of Darlington.

Durham is well known for its Norman cathedral and 11th-century castle, both designated a World Heritage Site by UNESCO in 1986. The castle has been the home of Durham University since 1832. HM Prison Durham is also located close to the city centre.

The name "Durham" comes from the Old English "dun", meaning hill, and the Old Norse "holme", which translates to island. The Lord Bishop of Durham takes a Latin variation of the city's name in his official signature, which is signed "N. Dunelm." Some attribute the city's name to the legend of the Dun Cow and the milkmaid who in legend guided the monks of Lindisfarne carrying the body of Saint Cuthbert to the site of the present city in 995 AD. Dun Cow Lane is said to be one of the first streets in Durham, being directly to the east of Durham Cathedral and taking its name from a depiction of the city's founding etched in masonry on the south side of the cathedral. The city has been known by a number of names throughout history. The original Nordic Dun Holm was changed to Duresme by the Normans and was known in Latin as Dunelm. The modern form Durham came into use later in the city's history. The north eastern historian, Robert Surtees chronicled the name changes in his History and Antiquities of the County Palatine of Durham but states that it is an "impossibility" to tell when the city's modern name came into being.

Local legend states that the city was founded in A.D. 995 by divine intervention. The 12th-century chronicler, Symeon of Durham, recounts that after wandering in the north, Saint Cuthbert’s bier miraculously came to a halt at the hill of Warden Law and, despite the effort of the congregation, would not move. Aldhun, Bishop of Chester-le-Street and leader of the order, decreed a holy fast of three days, accompanied by prayers to the saint. Saint Bede recounts that during this fast, Saint Cuthbert appeared to the monk Eadmer with instructions that the coffin should be taken to Dun Holm.

After Eadmer’s revelation, Aldhun found that he was able to move the bier, but did not know where Dun Holm was. By chance later that day, the monks came across a milkmaid at Mount Joy (southeast of present-day Durham). She stated that she was seeking her lost dun cow, which she had last seen at Dun Holm. The monks, realising that this was a sign from the saint, followed her. They settled at a "wooded hill-island formed by a tight gorge-like meander of the River Wear." After arriving at their destination, they erected the vestiges of Durham Cathedral, which was a "modest building." Symeon states that this was the first building in the city and, unfortunately, does not remain today having been supplanted by the Norman structure.

The legend is interpreted by a Victorian relief stone carving on the south face of the Cathedral and, more recently, by the bronze sculpture 'Durham Cow' (1997, Andrew Burton), which reclines by the river Wear in view of the Cathedral.

The Great Reform Act, 1832 saw the removal of the Prince Bishop’s powers, although he still has the right to a seat in the House of Lords and is regarded as the fourth most senior bishop in the Church of England. The Court of Claims of 1953 granted the traditional right of the bishop to accompany the sovereign at the coronation, reflecting his seniority.

The first census, conducted in 1801, states that Durham City had a population of 7,100. The Industrial Revolution mostly passed the city by. However, the city was well known for carpet making and weaving. Although most of the mediaeval weavers who thrived in the city had left by the nineteenth century, the city was the home of Hugh MacKay Carpets’ factory, which produced the famous brands of axminster and tufted carpets until the factory was forced into administration in April 2005. Other important industries were the manufacture of mustard and coal extraction.

The Industrial Revolution also placed the city at the heart of the coal fields, the county’s main industry until the 1970s. Practically every village around the city boasted a coal mine and, although these have since disappeared as part of the regional decline in heavy industry, the proud traditions, heritage and community spirit are still evident. The city also saw the creation of the world’s first passenger railway in 1825.

The nineteenth century also saw the founding of Durham University thanks to the benevolence of Bishop William Van Mildert and the Chapter in 1832. Durham Castle became the first college (University College, Durham) and the Bishop moved to Auckland Castle as his only residence in the county.

The first Durham Miners' Gala was held in 1871 and remains the largest socialist trade union event in the world. 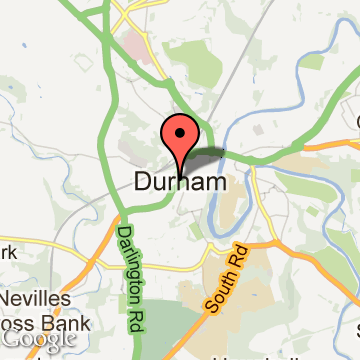