Bath is a spectacularly beautiful city which stands on the River Avon among the hills of England’s West Country. The city’s compactness and striking architecture - Roman baths and sweeping Georgian terraces - combine to produce one of the most elegant sights in Europe. The ancient Celts, who first inhabited this area, believed that Bath’s hot springs were sacred, but it was the Romans who built the temple and the famous baths - now restored to their original grandeur.

In the early eighteenth century, under the direction of the socialite, Beau Nash, Bath became England’s premier spa town, where the rich and celebrated members of fashionable society gathered to ‘take the waters’ and enjoy its theatres and concert rooms. During this period the renowned architect, John Wood, laid the foundations for a new Georgian city to be built using the honey-coloured stone that gives Bath its mellow and indefinable quality.

However, Bath is far from a fossilised museum piece. Besides the annual Bath Festival - now recognised as one of the most prestigious festivals in Europe - there are countless other arts activities spread over the year. Art is permanently on show at the Victoria Art Gallery, at the University-run Holburne Museum and at many other, more intimate galleries and shops. Bath is also home to the Museums of East Asian Art and Costume.

London is approximately one hour and a quarter from Bath by intercity train, and Bristol is about fifteen minutes away. For those seeking quieter retreats, Bath is surrounded by beautiful countryside, with the Cotswolds to the north, the Mendips to the south-west and, just across the Severn Bridge, the Wye Valley and the Forest of Dean. The coast at Weston-super-Mare or South Wales is also within easy reach.

The hills around Bath such as Bathampton Down saw human activity from the Mesolithic period. Several Bronze Age round barrows were opened by John Skinner in the 18th century. Bathampton Camp may have been an Iron Age hill fort or stock enclosure. A Long barrow site believed to be from the Beaker people was flattened to make way for RAF Charmy Down.

Archaeological evidence shows that the site of the Roman Baths' main spring was treated as a shrine by the Iron Age Britons, and was dedicated to the goddess Sulis, whom the Romans identified with Minerva; however, the name Sulis continued to be used after the Roman invasion, leading to the town's Roman name of Aquae Sulis (literally, "the waters of Sulis"). Messages to her scratched onto metal, known as curse tablets, have been recovered from the Sacred Spring by archaeologists. These curse tablets were written in Latin, and usually laid curses on people by whom the writers felt they had been wronged. For example, if a citizen had his clothes stolen at the baths, he would write a curse, naming the suspects, on a tablet to be read by the Goddess Sulis Minerva.

The temple was constructed in 60–70 AD and the bathing complex was gradually built up over the next 300 years. During the Roman occupation of Britain, and possibly on the instructions of Emperor Claudius, engineers drove oak piles into the mud to provide a stable foundation and surrounded the spring with an irregular stone chamber lined with lead. In the 2nd century, the spring was enclosed within a wooden barrel-vaulted building, which housed the calidarium (hot bath), tepidarium (warm bath), and frigidarium (cold bath). The city was given defensive walls, probably in the 3rd century. After the failure of Roman authority in the first decade of the 5th century, the baths fell into disrepair and were eventually lost due to silting up.

In March 2012 a hoard of 30,000 silver Roman coins, one of the largest hoards discovered in Britain, was discovered in Bath during an archaeological dig. The coins, believed to date from the third century, were unearthed about 450 feet from the Roman Baths.

Bath may have been the site of the Battle of Mons Badonicus (c. 500 AD), where King Arthur is said to have defeated the Anglo-Saxons, although this is disputed. The city fell to the West Saxons in 577 after the Battle of Deorham; the Anglo-Saxon poem known as The Ruin may describe the appearance of the Roman site about this time. A monastery was set up in Bath at an early date – reputedly by Saint David, though more probably in 675 by Osric, King of the Hwicce, perhaps using the walled area as its precinct. Nennius, a ninth-century historian, mentions a "Hot Lake" in the land of the Hwicce, which was along the Severn, and adds "It is surrounded by a wall, made of brick and stone, and men may go there to bathe at any time, and every man can have the kind of bath he likes. If he wants, it will be a cold bath; and if he wants a hot bath, it will be hot". Bede also describes hot baths in the geographical introduction to the Ecclesiastical History in terms very similar to those of Nennius. King Offa of Mercia gained control of this monastery in 781 and rebuilt the church, which was dedicated to St. Peter.

By the 9th century the old Roman street pattern had been lost and Bath had become a royal possession, with King Alfred laying out the town afresh, leaving its south-eastern quadrant as the abbey precinct. In the Burghal Hidage Bath is described as having walls of 1,375 yards (1,257 m) and was allocated 1000 men for defence. During the reign of Edward the Elder coins were minted in the town, based on a design from the Winchester mint but with 'BAD' on the obverse relating to the Anglo-Saxons name for the town Baðum, Baðan or Baðon, meaning "at the baths," and this was the source of the present name. Edgar of England was crowned king of England in Bath Abbey in 973.

King William Rufus granted the city to a royal physician, John of Tours, who became Bishop of Wells and Abbot of Bath, following the sacking of the town during the Rebellion of 1088. It was papal policy for bishops to move to more urban seats, and he translated his own from Wells to Bath. He planned and began a much larger church as his cathedral, to which was attached a priory, with the bishop's palace beside it. New baths were built around the three springs. However, later bishops returned the episcopal seat to Wells, while retaining the name of Bath in their title as the Bishop of Bath and Wells. St John's Hospital was founded around 1180, by Bishop Reginald Fitz Jocelin and is among the oldest almshouses in England. The 'hospital of the baths' was built beside the hot springs of the Cross Bath, for their health giving properties and to provide shelter for the poor infirm.

Administrative systems fell within the Hundreds. The Bath Hundred had various names over the centuries including The Hundred of Le Buri. The Bath Foreign Hundred or Forinsecum covered the area outside the city itself. They were later combined into the Bath Forum Hundred. The wealthy merchants had no status within the Hundred Courts and formed guilds to gain influence, they also built the first guildhall probably in the 13th century. Around 1200 the first mayor was also appointed. 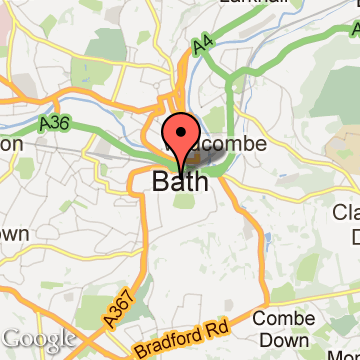