The City of Carlisle  is a local government district of Cumbria, England, with the status of a city and non-metropolitan district. It is named after its largest settlement, Carlisle, but covers a far larger area which includes the towns of Brampton and Longtown, as well as outlying villages including Dalston, Scotby and Wetheral. The city has a population of 100,739, and an area of 1,039.97 square kilometres (402 sq mi), making it the largest city in England by area (although the majority of its territory is not urbanised, but rural).

The current city boundaries were set as part of the provisions of the Local Government Act 1972, and cover an amalgamation of two former local government districts—the City and County Borough of Carlisle and the Border Rural District of Cumberland. The City of Carlisle shares a border with Scotland (to the north), and is bounded on the southwest by the borough of Allerdale, and on the south by Eden. The county of Northumberland is to the east.

Although the present boundaries date to the 20th century, the city traces its origins to a 1st-century Roman outpost associated with Hadrian's Wall. The Brythonic settlement that expanded from this outpost was destroyed by the Danes in 875. Thereafter the region formed part of the Southern Uplands of Scotland, until colonised under King William II of England in 1092. William II built Carlisle Castle, which houses a military museum. Carlisle Cathedral, founded in the 12th century, is one of the smallest in England.

A border city, and the second most northerly city in England, Carlisle predominantly spans the flood plain of the River Eden. Commercially, it is linked to the rest of England via the M6 motorway, and to the Scottish Lowlands via the A74(M) and M74 motorways.

Following both the Local Government Act 1888 and Local Government Act 1894, local government in England had been administered via a national framework of rural districts, urban districts, municipal boroughs and county boroughs, which (apart from the latter which were independent), shared power with strategic county councils of the administrative counties. The areas that were incorporated into the City of Carlilse in 1974 had formed part of the Border Rural District from the administrative county of Cumberland, and the politically independent County Borough of Carlisle.

After the exploration of reform during the mid-20th century, such as the proposals made by the Redcliffe-Maud Report in the late 1960s, the Local Government Act 1972 restructured local government in England by creating a system of two-tier metropolitan and non-metropolitan counties and districts throughout the country. The act formally established the City of Carlisle as a local government district of the new shire county of Cumbria on 1 April 1974. The new dual local authorities of Carlisle City Council and Cumbria County Council had been running since elections in 1973 however. The leading article in The Times on the day the Local Government Act came into effect noted that the "new arrangement is a compromise which seeks to reconcile familiar geography which commands a certain amount of affection and loyalty, with the scale of operations on which modern planning methods can work effectively".

In 2011 Carlisle played host to Radio 1's Big Weekend which featured The Foo Fighters, Lady Gaga and The Strokes. 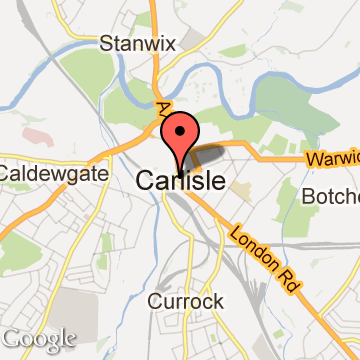