Ely  is a cathedral city in Cambridgeshire, England, 14 miles (23 km) north-north-east of Cambridge and about 80 miles (129 km) by road from London. Æthelthryth (Etheldreda) founded an abbey at Ely in AD 673; the abbey was destroyed in 870 by Danish invaders and was rebuilt by Ethelwold, Bishop of Winchester, in 970. Construction of the cathedral was started in 1083 by the first Norman bishop, Simeon. Sacrist, Alan of Walsingham\'s octagon, built over Ely\'s nave crossing between 1322 and 1328, is the "greatest individual achievement of architectural genius at Ely Cathedral" according to architectural historian Nikolaus Pevsner. Building continued until the dissolution of the abbey in 1539 during the Reformation. The cathedral was sympathetically restored between 1845 and 1870 by the architect George Gilbert Scott. As the seat of a diocese, Ely has long been considered a city; in 1974, city status was granted by royal charter.

Ely is built on a 23-square-mile (60 km2) Kimmeridge Clay island which, at 85 feet (26 m), is the highest land in the fens. Major rivers including the Witham, Welland, Nene and Great Ouse, feed into the fens and, until draining commenced in the seventeenth century, formed freshwater marshes and meres within which peat was laid down. There are two sites of special scientific interest in the city: a former Kimmeridge Clay quarry, and one of the United Kingdom\'s best remaining examples of medieval ridge and furrow agriculture.

The economy of the region is mainly agricultural though before the fens were drained, the harvesting of osier (willow) and sedge (rush) and the extraction of peat were important activities, as were eel fishing—from which the settlement\'s name is derived—and wild fowling. The city had been the centre of local pottery production for more than seven hundred years, including pottery known as Babylon ware. A Roman Road, Akeman Street, passes through the city; the southern end is at Ermine Street near Wimpole and its northern end is at Brancaster. Little direct evidence of Roman occupation in Ely exists although there are nearby Roman settlements such as at Little Thetford and Stretham. A coach route, known in 1753 between Ely and Cambridge, was improved in 1769 as a turnpike (toll-road). The present day A10 closely follows this route; a south-western bypass of the city was built in 1986. Ely railway station built in 1845 is on the Fen Line and is now a major railway hub: north to King\'s Lynn, north-west to Peterborough, east to Norwich, south-east to Ipswich and south to Cambridge and London.

The King\'s School is a coeducational boarding establishment which was given its royal charter in 1541 by Henry VIII; the school claims an existence since 970. Henry I granted the first annual Fair, Saint Audrey\'s (Etheldreda\'s) seven-day event, to the abbot and convent on 10 October 1189; the word "tawdry" originates from cheap lace sold at this fair. Present day annual events include a fireworks display in Ely Park, first staged in 1974. The city of Ely has been twinned with Denmark\'s oldest town, Ribe since 1956. Ely City football club was formed in 1885.

Roswell Pits are a palaeontologically significant Site of Special Scientific Interest (SSSI) 1 mile (1.6 km) north-east of the city. The Jurassic Kimmeridge Clays were quarried in the nineteenth and twentieth centuries for the production of pottery and for maintenance of river embankments. During this process many specimens of ammonites, belemnites and bivalves were found, in addition to an almost complete specimen of a Pliosaur.

There is some scattered evidence of Late Mesolithic to Bronze Age activity in Ely such as Neolithic flint tools, a Bronze Age axe and spearhead. There is slightly denser Iron Age and Roman activity with some evidence of at least seasonal occupation. For example, a possible farmstead, of the late Iron Age to early Roman period, was discovered at West Fen Road and some Roman pottery was found close to the east end of the cathedral on The Paddock. There was a Roman settlement, including a tile kiln built over an earlier Iron Age settlement, in Little Thetford, 3 miles (4.8 km) to the south.

The name of Ely has always been recognized as difficult by place-name scholars, and the origin and meaning of the name are still disputed. The earliest record of the name is in the Latin text of Bede’s Historia ecclesiastica gentis Anglorum, where Bede wrote Elge. This is apparently not a Latin name, and subsequent Latin texts nearly all used forms Elia, Eli, or Heli with inorganic H-. In Old English charters, and in the Anglo-Saxon chronicle, the spelling is usually Elig.

Skeat derived the name Ely from what he called "O[ld] Northumbrian" ēlġē, meaning "district of eels". This uses a hypothetical word *ġē, which is not recorded in isolation but thought by some to be related to the modern German word Gau, meaning "district". The theory is that the name then developed a vowel to become ēliġē, and was afterwards re-interpreted to mean "eel island". This essentially is the explanation accepted by Reaney, Ekwall, Mills and Watts.

But difficulties remain. Bailey, in his discussion of ġē names, has pointed out that Ely would be anomalous if really from ēlġē "eel district", being remote from the areas where possible examples of ġē names occur, and moreover, there is no parallel for the use of a fish-name in compounds with ġē. More seriously, the usual English spelling remains Elig, even in the dative case-form used after many prepositions, where Elige would be expected if the second element were īġ "island". This is in conflict with all the other island names which surround Ely. 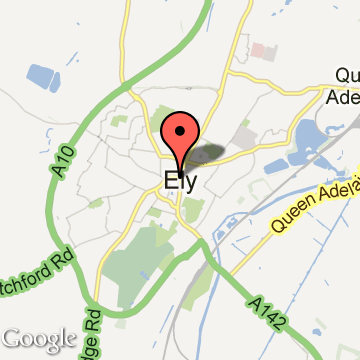