Nestled on the banks of the eternal Ganga, Kanpur stands as one of North India’s major industrial centres with its own historical, religious and commercial importance. Believed to be founded by king Hindu Singh of the erstwhile state of Sachendi, Kanpur was originally known as ’Kanhpur’.

Must See Places in Kanpur, India

Kanpur is believed to have been founded by members of the Chandela dynasty from the state of Sachendi. The city's name is believed to derive from Kanhiyapur (from the Hindi meaning "town of Kanhaiya"). During the British Raj, this was anglicised to Cawnpore. In old British maps it is also listed as Khanpur.

Others believe that the name is derived from Karnapur (meaning "town of Karna", one of the heroes of the Mahabharata). Another theory is that it came from the nearby town of Makanpur, earlier known as Khairabad, where the Sufi saint of the Madariya Sufi order, Badiuddin Zinda Shah Madar, settled.

Kanpur's development is unclear until the 13th century. Although no reference to Kanpur is found in written documents before this time, the history of two of its suburbs, Jajmau and Bithoor, can be traced back to pre-13th century times. Bithoor is located about 20 km upstream from the city and is approximately 10 km from the IIT Kanpur campus. Jajmau is about 8 km east of the city and is nearly 20 km downstream from the IIT Campus. According to Hindu mythology, just after creating the universe, Lord Brahma performed the Ashvamedha at Bithoor and established a lingam there. Another legendary site at Bithoor is the Valmiki Ashram, where the famous sage Valmiki is supposed to have written the Sanskrit epic, the Ramayana. According to this epic, Queen Seeta, on being exiled by King Ramachandra of Ayodhya, spent her days in seclusion at the ashram bringing up her twin sons, Lava and Kush.

At Jajmau, there are remains of an ancient fort, now surviving as a huge mound. Recent excavations on this mound indicate that the site is very old, perhaps dating back to the Vedic age. Popular legends state that the fort belonged to Yayati, a king of the ancient Chandravanshi race.

At Shivrajpur, 20 km from the Kanpur Central railway station, there is an ancient temple built by Chandel Raja Sati Prasad in memory of his queen. This temple is supposed to have been built in a night and is situated on the banks of the Ganges. This temple is famous for its architectural work and carving designs.

Parihar rulers of Kannauj may have ruled this place for a significant part of history long before the beginning of Mughal era. Some historical accounts suggest Pratihara emperor, Mihir Bhoja, has ruled in Kanpur since nearby Kannuaj was the capital of Parihar 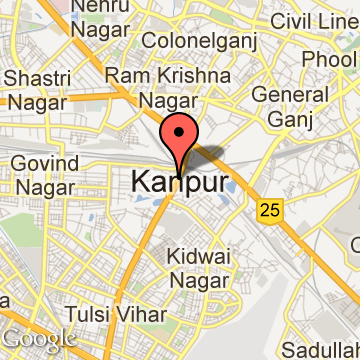