Kushinagar  is a town and a nagar panchayat in Kushinagar district near modern Kasia in the Indian state of Uttar Pradesh. It is an important Buddhist pilgrimage site, where Gautama Buddha attained Parinirvana after his death. Kushinagar is 20 km (south) away from Padrauna, 52 km (east) from Gorakhpur, and 35 km (north) from Deoria. He later attained Parinirvana in the region once he got over his illness. This town is thus known for being the final resting place of Lord Buddha. There are many monasteries and stupas in the region dated back centuries, and almost all of them are in ruins now. You can visit these monasteries during your trip to the town of Kushinagar. You can also visit the various temples that have been constructed in the region by many Buddhists, around these ruins by people from all over the world. The Mahaparinirvana stupa is a must visit location in the town of Kushinagar that many tourists, both locals and people from abroad, flock to. This site is located right above the spot where Lord Buddha is said to have finally rested

Must See Places in Kushinagar, India

Kushinagar, district of the eastern Uttar Pradesh, is known for its cultural heritage all over the world. It is one of the four holiest places for the Buddhists. At Kushinagar, Great Lord Buddha, founder of Buddhism, delivered his last sermon. Outside India, it is an International Buddhist Pilgrimage Centre. The followers of the Buddhism, especially from Asian Countries, wish to visit this place at least once in their lifetime.The   present Kushinagar is identified with  Kushawati ( in pre- Buddha period ) and   Kushinara (in Buddha period). Kushinara was the capital of  Mallas which was one of the sixteen mahajanpads of the 6th Century B.C.
According to the Valmiki's Ramayana, the Mallas was earlier part of Kosala Janpad. Kushwati capital was built by Kush, son of Lord Ram, the hero of the famous epic, 'The Ramayan'.  After Ram's renunciation of the world Kusa left Kusavati for Ayodhya. His cousin, ChandraKetu, son of Lakshman took possession of this region. As per Buddha Pali literature, Kushawati was named prior to the king Kush. The naming of Kushwati was due to abundance of Kush grass found in this region which still holds good. Since then, it remained an integral part of the erstwhile empires of Maurya, Shunga, Kushana, Gupta and Harsha dynasties.In medieval period, Kushinagar had passed under the suzerainty of  Kultury Kings. Kushinara continued to be a living city till the 12th Century A.D. and was thereafter lost into oblivion. Padrauna is believed to be ruled over by a Rajput adventurer, Madan Singh in the 15th century A.D.However, modern Kushinagar came into prominence  in the 19th Century with archeological   excavations carried out by A.Cuningham, the first Archeological Surveyor of India and later Nirvana Statue of Lord Buddhafollowed by C.L. Carlleyle  who exposed the main stupa and also discovered a 6.10 meters long statue of reclining Buddha, in 1876 A.D. Ven. Chandra Swami, a Burmeses Monk, came to India in 1903 and made  "Mahaparinirvana Temple" into a living shrine.After independence, Kushinagar remained the part of district Deoria. On 13th May, 1994,  it  came into being as a new district of Uttar Pradesh for an all round balanced and speedy development 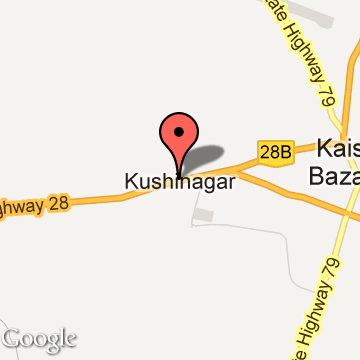