Mirzapur is a city in Uttar Pradesh, India, roughly 650 km from both Delhi and Kolkata, almost equidistant  from Allahabad and Varanasi. Mirzapur has a population of 233,691 and is known for its carpet and brassware industries. The city is surrounded by several hills and is the headquarters of Mirzapur District.It was once the largest district in India.

Must See Places in Mirzapur, India

According to several facts, the Mirzapur was established by the British East India Company in 1735 while the civilization at here was found in 5000 BCE. As a proof of the existence of the lower Paleolithic age culture, the artifacts of prehistoric caves, the painted rocks and other evidences in the Belan River Valley . Here we can find the evidences that are more than 17000 BCE. Some interesting petroglyphs in the sandstone of the Vindhya range are found in Morhana Pahar in Mirzapur district. The depictions of chariots, horses, weapons and people in these works have given rise varied interpretations and findings by historians.

Before the establishment of the town the area was dense forest and freely used by various states like Benaras (Varanasi), Sakteshgadh, Vijay Gadh, Naina Gadh (Chunar), Naugadh, Kantit and Rewa for Hunting. British East India Company has established this area to fulfill the need of a trading center between central and western India. This time Rewa was a well-established state of central India and was directly connected with Mirzapur by the Great Deccan Road. Over the time Mirzapur became a famous trading center of Central India and started trading of cotton, and silk at very large scale.

The East India Company named this place as Mirzapore. The word Mirzapur derived from 'Mirza'. The word Mīrzā is derived from the Persian term ‘Amīrzāde which literally means "child of the ‘Amīr" or "child of the ruler" in Persia‘Amīrzād in turn consists of the Arabic title ‘Amīr (engl. Emir), meaning "commander", and the Persian suffix -zād, meaning "birth" or "lineage". Due to vowel harmony in Turkic languages, the alternative pronunciation Morza (plural morzalar; derived from the Persian word) is also used. The word entered English in 1595, from the French émir. The meaning of Mirzapore is the place of King. The name Mirzapore became Mirzapur after the freedom of India.

Most of the city was established by British officers, and so places are named after Britons like Wellesleyganj , Mukeri Bazar , Dankeen Ganj , and a famous waterfall of the city, Windham Water Fall . The building of Municipal Corporation was also built by the British Government.

It is the place in India where the Holy River Ganges meets with Vindhya Range. This is considered significant in Hindu Mythology and has a mention in Vedas. 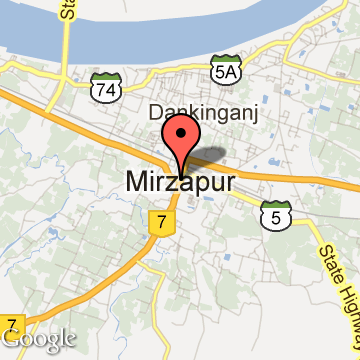