Jhansi, the gateway to Bundelkhand, was a stronghold of the Chandela kings but lost its importance after the eclipse of the dynasty in the 11th century.

It rose to prominence again in the 17th century under Raja Bir Singh Deo who was a close associate of the Mughal Emperor Jahangir. However, its greatest claim to fame is its fiery queen Rani Laxmibai, who led forces against the British in 1857, sacrificing her life to the cause of Indian independence.

A new dimension has been added to this historic city with the introduction of the Jhansi Festival, held every year in February-March. It offers a fine opportunity to enjoy the arts, crafts and culture of the region.

Must See Places in Jhansi, India

The Muslim governors of the Mughal empire were constantly making incursions into the Bundela country. In 1732 Chhatrasal, the Bundela king, called in the aid of the Hindu Marathas. They came to his assistance, and were rewarded by the bequest of one-third of the Maharaja's dominions upon his death two years later. The Maratha general developed the city of Jhansi, and peopled it with inhabitants from Orchha state. In 1806 British protection was promised to the Maratha chief. In 1817, however, the Peshwa in Pune ceded all his rights over Bundelkhand to the British East India Company. In 1853 the Raja of Jhansi died childless, and his territory was annexed by the Governor-General of India. The Jhansi state and the Jalaun and Chanderi districts were then formed into a superintendency. Rani Lakshmibai, widow of the Raja, protested the annexation because she was not allowed to adopt an heir (as was customary), and because the slaughter of cattle was permitted in the Jhansi territory.

The Indian Rebellion of 1857 accordingly found Jhansi ripe for rebellion. In June a few men of the 12th Native Infantry seized the fort containing the treasure and magazine, and massacred the European officers of the garrison along with their wives and children. Rani Lakshmi Bai put herself at the head of the rebels and died in battle in Gwalior. It was not until November, 1858 that Jhansi was brought under British control. It had been given to the Maharaja of Gwalior, but came under British rule in 1886 as the result of a territorial swap.

Jhansi was added to the United Provinces, which became the state of Uttar Pradesh after India's independence in 1947.

The fort standing in the hilly area shows that how the North Indian style of fort construction differentiated from that of the South. In South majority of the forts were built on the sea beds like Bekal Fort in Kerala.

CURRENT STATUS Though Jhansi has a airport from the British times it is not operational commercially.It is used by the army and political visitors.There had been a demand to make it operational for commercial purposes in the 1990s and again in 2000s.The government of BSP announced the construction of a full fledged new airport in April 2011 but still there is no surity of its commencement. 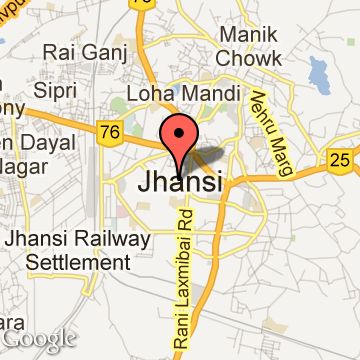