Agra is an ancient city, mentioned in the Mahabharata and came into the limelight during the reign of the Mughals. It is famous as being home to one of the Seven Wonders of the World-the Taj Mahal. The Taj is a monument of such incredible elegance that it is considered synonymous with beauty itself.

Situated along the banks of River Yamuna in Uttar Pradesh, the Agra District is known for its rich cultural heritage, which echoes its historical past. The city contains numerous attractions, including monuments, temples and landmarks, most of which were built during the Mughal Era. One of the most notable monuments in Agra is the Taj Mahal, a UNESCO World Heritage Site. Being home to the Taj Mahal, Agra is often known by the nickname 'Taj City'.

Besides Taj Mahal, another major landmark of Agra is the Agra Red Fort, which is another UNESCO World Heritage Site. The main monuments located within the fort include the Anguri Bagh Gardens, Diwan-i-Khas, Jahangir's Palace, Ladies' Bazaar, Moti Masjid, Nagina Masjid and Shish Mahal.

Tourists visiting Agra can also visit the Itmad-ud-Daulah Tomb, which is often referred to as ‘Baby Taj’, due to its similar architecture. Other notable landmarks and monuments in Agra are the Chini Ka Rauza, Soami Bagh Samadh and Tomb of Akbar the Great.

Located 38.8 km away from the Taj Mahal, Fatehpur Sikri is another notable attraction in Agra. Built during the 16th century by Mughal Emperor Akbar, this city houses numerous monuments and temples. One of the largest mosques in India, the Jama Masjid, is located in Fatehpur Sikri.

Some of the other popular monuments in Fatehpur Sikri include Mariam-uz-Zamani’s Palace, Buland Darwaza, Tomb of Salim Chisti and Panch Mahal, among others. Those who wish to learn about the history and culture of Agra can visit the two most popular museums, the Spiritual Museum and the Taj Mahal Museum. Keetham Lake, better known as Sur Sarovar Bird Sanctuary, is a popular picnic spot near Agra.

Besides monuments and landmarks, Agra has some beautiful parks and gardens, including the Mehtab Bagh in central Agra, which is the most famous. From the garden, unobstructed views of the back of the Taj Mahal are available. The first Mughal-style garden created in Agra, Ram Bagh is another popular park in Agra. Tourists can also visit other parks and gardens like Soami Bagh, Shah Jahan Park and Dayal Bagh.

Must See Places in Agra, India

Though Agra's history is largely recognised with Mughal Empire, the place was established much before it and has linkages since Mahabharat period and Mahirshi Angira in 1000 BC. It is generally accepted that Sultan Sikandar Lodī, the Ruler of the Delhi Sultanate founded Agra in the year 1504. After the Sultan's death the city passed on to his son Sultan Ibrāhīm Lodī. He ruled his Sultanate from Agra until he fell fighting to Bābar in the First battle of Panipat fought in 1526.

The golden age of the city began with the Mughals. It was known then as Akbarabād and remained the capital of the Mughal Empire under the Emperors Akbar, Jahāngīr and Shāh Jahān. Shāh Jahān later shifted his capital to Shāhjahānabād in the year 1649. 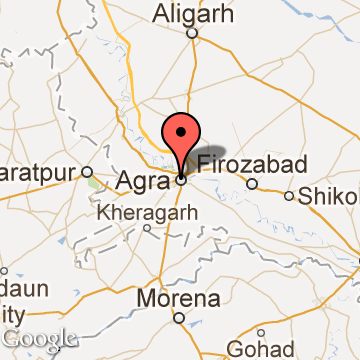