Gorakhpur is a city in the eastern part of the state of Uttar Pradesh in India, near the border with Nepal. It is the administrative headquarters of Gorakhpur District and Gorakhpur Division. The city is also home to many historic Buddhist sites, Imambara, an 18th century dargah, and the Gita Press, a publisher of Hindu religious texts. It is also the headquarter of North Eastern Railways. Gorakhnath Temple here has been a major site of attraction for the pilgrims. The famous Gita Press which publishes Hindu religious texts is located in the city of Gorakhpur. Sharing a border with the prominent region of Nepal and holding the headquarters of the busy North Eastern Railways makes Gorakhpur a very active city.

Gorakhpur is considered a religious center containing many historic temples and sites. The city is rich in history of the two major religions of Hinduism and Buddhism. It is named after the ascetic Guru Gorakshnath a saint that popularized “Hath Yoga” a form of yoga which concentrates on mastering natural power. The Gorakhnath Temple where he perfected his art is a major tourist attraction in the city of Gorakhpur. The city of Gorakhpur is the birthplace of King Vikas Sankrityayan Ji along with many other great historical people.

The city and district of Gorakhpur are named after a renowned ascetic saint, Gorakshanath, the chief disciple of the yogi Matsyendranath. Together, Matsyendranath and Gorakshanath founded the Nath Sampradaya line of saints. Gorakhnath Temple is said to stand on the spot where Gorakshanath practiced Hatha Yoga to develop self-control.

Must See Places in Gorakhpur, India

In ancient times the geographical area of Gorakhpur included the modern districts of Basti, Deoria, Kushinagar, Azamgarh. According to Vedic writings, the earliest known monarch ruling over this region with his capital at Ayodhya was Iksvaku, founder of the Solar dynasty. The solar dynasty produced a number of kings; Rama of the Ramayana is most well-known. The entire region was an important centre of Aryan culture and civilization, a part of the famous kingdoms of Koshala and Malla, two of the sixteen Mahajanapadas (states) in 6th century BCE India. The region also formed part of Aryavart and Madhyadesh

Gorakhpur is also birthplace of the king Chandra Gupta Maurya, who belonged to Mauryans, a Kshatriya clan of the ancient republic of [Pippalivana/"Piparahiyan"]located between Rummindei in the Nepali Terai and Kasia in the Gorakhpur district of Uttar Pradesh.

Gautama Buddha, founder of Buddhism, who was born at Kapilvastu in Nepal, renounced his princely clothing at the confluence of the rivers Rapti and Rohini, near Gorakhpur, before setting out on his quest of truth in 600 BCE. Later he died in the courtyard of Mall King Sastipal Mall at his capital Kushinara which is now known as Kushinagar, there is a monument to this effect at Kushinagar even today. The city is also associated with the travels of Lord Buddha's contemporary Lord Mahavira, the 24th Tirthankara of Jainism. Lord Mahavira was born at a place not very far from Gorakhpur. Later he took his mahaparinirvan at his maternal uncle's palace at Pava which is about 15 kilometers from Kushinagar(Pavapuri and Kushinara were the twin capital of Mall dynasty which was part 16 Mahajanpads of ancient India). Malla dynasty was following democratic way of governance from their Santhagara and thus Gorakhpur is also the part of ancient Gana sangha. There is a mention in the epic Mahabharata that Prince Bhim, the younger brother of King Yudhistr had visited Gorakhpur to invite saint Gorakhnath to attend his Rajsuuya Yagna.

After the Iksvaku dynasty was conquered by Magadha's Nanda Dynasty in the 4th century BC, Gorakhpur became in turn part of the Maurya, Shunga, Kushana, Gupta and Harsha empires. The great emperor of India Chandragupta maurya belonged to Moriyas, a Kshatriya (warrior) clan of a little ancient republic of Pippalivana located between Rummindei in the Nepali Tarai and Kasia in the Gorakhpur district of Uttar Pradesh.

In the 10th century, the Tharu king of Mausen Madan Singh ruled over Gorakhpur city and the adjoining area. Gorakhpur was also birthplace of King Vikas Sankrityayan. 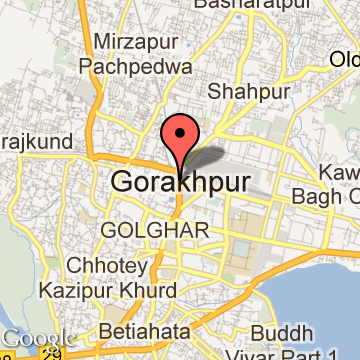