Farrukhabad is a district which falls under the state of Uttar Pradesh, India. The global location of the district is between 26° 46' and 27° 43' north latitude and 79° 7' and 80° 2' east longitude. The Farrukhabad district is a portion of Kanpur division. On the agricultural front, the district is engaged in cultivating a fairly large quantity of potato and it is also well known for producing sunflower.

Farrukhabad can boast of some places of historical importance like Kampil and Sankisa, both famous among the tourists. Kaimganj is also a well known place for being the home of a sugar mill and a tobacco industry.

Farrukhabad was founded by Nawab Mohammad Khan Bangash, who named it after the reigning emperor Farrukhsiyar, in 1714, the district of Farrukhabad forms part of Kanpur division. The township of Farrukhabad, Fatehgarh consist of two towns, Farrukhabad & Fatehgarh, the former being the headquarters of the Tehsil & the latter forming the headquarters of the district, both lying about 5 Kms apart. The district as it exists now is bounded by Badaun and Shahjahanpur on the north, Hardoi on the east, Kannauj on the south and district Etah & Mainpuri on the west. Rivers Ganga & Ramganga are located towards the east & Kali Nadi towards the south.

Fatehgarh derives its name from an old fort. Fatehgarh remained a Military Station of considerable importance and in 1802 it became the headquarters of the Governor Generals Agent for the ceded provinces. In 1818 a gun carriage factory was established here.

Must See Places in Farrukhabad, India 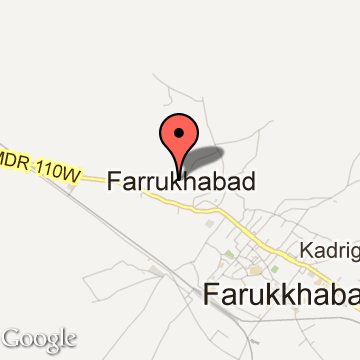