Retaining a feast of British Raj architecture as well as home to two grandiose tombs, Lucknow was the administrative and cultural hub of the Nawabs of Avadh (Oudh). During the period of the weakening of the Mughal Empire, the city rose into prominence as a centre for poetry, music, dance and courtly diction.

Modern Lucknow, extending along the banks of the Gomti River, is a seamless blend of the medieval and the modern, as new shopping complexes and ultra-modern mall are popping up all over the city. Today capital of the most populous state of Uttar Pradesh, it is a fabulous place to sample its elaborate cuisine for which the city is widely known.

Must See Places in Lucknow, India

Since 1350 AD Lucknow and parts of the Awadh region were ruled by the Delhi Sultanate, Mughal Empire, Nawabs of Awadh, East India Company and the British Raj. Lucknow was one of the major centres of Indian rebellion of 1857, participated actively in India's Independence movement, and emerged as an important city of North India. Until 1719, subah of Awadh was a province of the Mughal Empire administered by a Governor appointed by the Emperor. Saadat Khan also called Burhan-ul-Mulk a Persian adventurer was appointed the Nazim of Awadh in 1722 and he established his court in Faizabad near Lucknow.

Awadh, known as the granary of India, was important strategically for the control of the fertile plain between the Ganges and the Yamuna rivers known as the Doab. It was a wealthy kingdom, able to maintain its independence against threats from the Marathas, the British and the Afghans. The third Nawab, Shuja-ud-Daula, fell out with the British after aiding the fugitive Nawab of Bengal Mir Qasim. He was comprehensively defeated in the Battle of Buxar by the East India Company, which forced him to pay heavy penalties and cede parts of his territory. The British appointed a resident in 1773 and over time gained control of more territory and authority in the state. They were, however, disinclined to capture Awadh outright and be brought face to face with the Marathas and the remnants of the Mughal Empire.

Many independent kingdoms, such as Awadh, were established when the Mughal empire disintegrated. Awadh’s capital, Lucknow rose to prominence when Asaf-ud-Daula, the fourth nawab, shifted his court here from Faizabad in 1775. The city was also North India’s cultural capital, and its nawabs, best remembered for their refined and extravagnt lifestyles, were patrons of the arts. Under them music and dance flourished, and many monuments were erected. Of the monuments standing today, the Bara Imambara, the Chhota Imambara, and the Rumi Darwaza are notable examples. One of the more lasting contributions by the Nawabs is the syncretic composite culture that has come to be known as the Ganga-Jamuni Tehzeeb.

In 1798, the fifth Nawab Wazir Ali Khan alienated both his people and the British, and was forced to abdicate. The British then helped Saadat Ali Khan to the throne. Saadat Ali Khan was a puppet king, who in the treaty of 1801 ceded half of Awadh to the British East India Company and also agreed to disband his troops in favour of a hugely expensive, British-run army. This treaty effectively made the state of Awadh a vassal to the British East India Company, though it nationally continued to be part of the Mughal Empire in name until 1819.

The treaty of 1801 formed an arrangement that was very beneficial to the Company. They were able to use Awadh's vast treasuries, repeatedly digging into them for loans at reduced rates. In addition, the revenues from running Awadh's armed forces brought them useful revenues while it acted as a buffer state. The Nawabs were ceremonial kings, busy with pomp and show but with little influence over matters of state. By the mid-nineteenth century, however, the British had grown impatient with the arrangement and wanted direct control of Awadh. 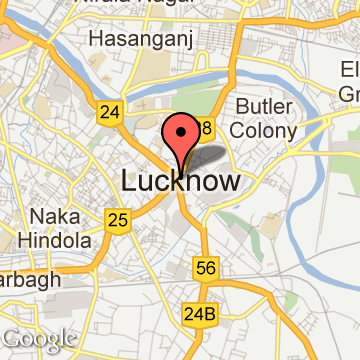