Orai is a city and a municipal board in Jalaun district in the Indian state of Uttar Pradesh. It is the district headquarters for Jalaun District which is part of Jhansi division.It is situated on NH25 in between Jhansi and Kanpur and on Bilrayan-Panwari SH21 .It is located in the Bundelkhand region.

Orai has been named after a saint (Rishi) Uddalak because he worshipped there and has historical value because of its location, which is between Jhansi, Mahoba and Kalpi. Orai was also known as the City of King 'Mahil' who was infamous for his bad habits and back-biting; he betrayed his nephews Aalah and Udal and one of them, Udal, was killed and according to a proverb Aalah is still alive because he is immortal.

Must See Places in Orai, India

The town of Kalpi on the Yamuna was conquered by the armies of Muhammad of Ghor in 1196. Early in the 14th century the Bundelas occupied the greater part of Jalaun, and even succeeded in holding the fortified post of Kalpi. That important possession was soon recovered by the Delhi Sultanate, and passed under the way of the Mughal Empire. Akbar's governors at Kalpi maintained a nominal authority over the surrounding district, and the Bundela chiefs were in a state of chronic revolt, which culminated in the war of independence under Maharaja Chhatrasal. On the outbreak of his rebellion in 1671 he occupied a large province to the south of the Yamuna. Setting out from this base, and assisted by the Marathas, he conquered the whole of Bundelkhand. On his death in 1732 he bequeathed one-third of his dominions to his Maratha allies, who before long succeeded in annexing the whole of Bundelkhand. Under Maratha rule the country was a prey to constant anarchy and strife.In 1806 Kalpi was made over to the British, and in 1840, on the death of Nana Gobind Ras, his possessions lapsed to them also. Various interchanges of territory took place, and in 1856 the boundaries of the British district were substantially settled, with an area of 1477 square miles.

Jalaun was the scene of much violence during the Revolt of 1857. When the news of the rising at Kanpur reached Kalpi, the men of the 53rd Native Infantry deserted their officers, and in June the Jhansi rebels reached the district, and began their murder of Europeans. It was not until September 1858 that the rebels were finally defeated. In the later 19th century, the district suffered much from the invasive kans grass (Saccharum spontaneum), owing to the spread of which many villages were abandoned and their land thrown out of cultivation. The population of the district was 399,726 in 1901, and the two largest towns are Kunch and Kalpi (pop. 10,139 in 1901). The district was traversed by the line of the Indian Midland railway from Jhansi to Kanpur. A small part of it is watered by the Bethwa Canal. Grain, oil-seeds, cotton and ghee were exported. 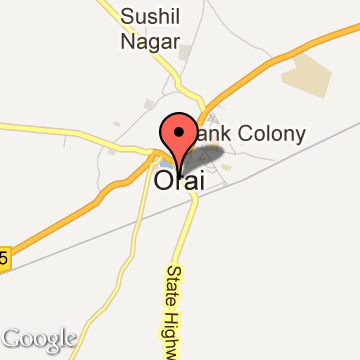