Jorhat is a large town that is situated in the state of Assam. The town has a significant history and there are many tombs and burial places of ancient kings that can be seen in and around the town. One can see the burial site of the Ahom Kings in Rajmaidam. There are various tea plantations and gardens that are located here and these are worth visiting. Driving around the gardens can be pleasant experience. It is also possible to visit the Tocklai Research Association that is located near the town and this is one of the oldest research centers of this type.
There are many temples and monasteries that are present in the town as well and some of them are Hatigar, Dekiakowa Bornamghar, Borbetai Than, Garakiadhol Temple, Garmur Satra and Dakinpat Satra. The town has a good mixture of both ancient and modern culture and the people in this town are striving to maintain old traditions and practices.
It might be worthwhile to check out the Gibbon Wildlife Sanctuary that is located nearby. Chandan Nagar is a suburb of the city that is known for its culturally active population. There is a modern golf course that can be seen in the town at the Gymhkan Club as well.

Must See Places in Jorhat, India

Jorhat("jor" means join and "hat" means market) means two hats or mandis-“Macharhat” and “Chowkihat” which existed on the two different banks of the river Bhogdoi. During the 18th Century, Jorhat was the last capital of the Ahom Kingdom, as a planned town under royal patronage. It is often spelt as "Jorehaut" during the British reign. In the year 1794, the Ahom King Gaurinath Singha shifted the capital from Sibsagar, erstwhile Rangpur to Jorhat. Many tanks were built around the capital city by the Ahom royalty such as Rajmao Pukhuri or Borpukhuri, Buragohain Pukhuri, Bolia Gohain Pukhuri, Kotoki Pukhuri and Mitha Pukhuri. This town was a flourishing and commercial metropolis but completely destroyed by a series of Burmese invasions of Assam between 1817 and the arrival of the British force in the year 1824 under the stewardship of David Scott and Captain Richard.he British Rule, though not free from rebellions and revolutions, contributed to the reemergence of this historical town. From the very first decade of the British rule, revolutionaries like Gomdhar Konwar, Jeuram Medhi, and Piyali Phukan emerged. The British system of administration came into vogue in the year 1839 with an established Police Thana. During the great Sepoy Mutiny, Maniram Dewan and Piyali Barua were hanged in public at this very place in 1858.In 1885, a narrow gauge railway, Jorhat Provincial Railway, became operational. In time, this contributed to the rapid growth of the tea industry.Although, the Civil Sub-division under Sibsagar district at Jorhat was formed in 1869, it was declared the administrative headquarters of the undivided Sibsagar district in 1911. The Sibsagar District comprised the present Sibsagar, Jorhat and Golaghat districts and parts of Karbi-Anglong district. Major A. Playfare served as the first Deputy Commissioner. Presently, Jorhat is being modernized with many new commercial and non-commercial establishments. The old families of this ever prosperous city have transformed the once sleepy city into a bustling and a well organised entity. 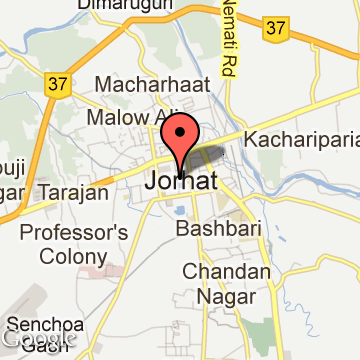