Gauhati or Guwahati, the erstwhile capital of the state of Assam was earlier known as "Pragiyotishpura" (The Light of East). This city with a varied history dating back to the 6th century is also the most developed and important city of Assam. The name suits Guwahati remarkably due to its terrain and structure and with the river Brahmaputra bisecting the city into two halves, the city represents a miniature Assam complete with a collection of all inhabitants, their lifestyles and their dependence on the mighty river. However, the presence of mighty Brahmaputra carving its way through the city makes for a romantic and memorable experience. Guwahati is replete with various religious places, green hills, tea plantations, educational institutes and Art Workshops. The city with its ancient roots offers a plethora of archaeological sites, historical monuments and educative as well entertaining museums. The excavation sites and the artifacts recovered from the sites make for a very interesting and exciting audience. The city offers an opportunity to interact with not only the Assamese populace but also the immigrants from all adjoining states, thus making it a vibrant cosmopolitan city. A visit to Guwahati is incomplete without satiating the taste buds with authentic Assamese as well as Eastern Indian food mix. The visit also demands acquisition of mementos from Assam to adorn the house. There is a wide choice for shopping in Guwahati where the artisans even from remote Assam arrive with bag full of goodies. The Satriya as well indigenous art and craft items and bamboo and cane work goods are recommended for the sheer innovativeness, creativity and the afford ability factor.

Must See Places in Guwahati, India

Guwahati's myths and history go back several thousands of years. Although the date of the city's beginning is unknown, references in the epics, Puranas, and other traditional histories, lead many to assume that it is one of the ancient cities of Asia.Epigraphic sources place the capitals of many ancient kingdoms in Guwahati. It was the capital of the mythological kings Narakasura and Bhagadatta according to the Mahabharata. The ancient sakti temple of Goddess Kamakhya in Nilachal hill (an important seat of Tantric and Vajrayana Buddhism), the ancient and unique astrological temple Navagraha in Chitrachal Hill, and archaeological remains in Basista and other locations support the mythological assertions of the city's ancient past.The Ambariexcavations trace the city to the 6th century AD. It was known as Pragjyotishpura and Durjoya in different periods and was the capital under the Varman Dynasty and the Pala dynasties of the Kamarupa kingdom. Descriptions by Xuanzang (Hiuen Tsang) reveal that during the greatest Varman king Bhaskar Varman (7th century AD), the city stretched for about 30 li (15 km) and was probably the principal base for his strong naval force (30,000 war-boats, with officers who were knowledgeable of the sea-routes from the Indian Ocean to China - Xuanzang). The city remained as the capital of Assam till the 10th-11th century AD under the rulers of the Pala dynasty. Excavations in Ambari and the brick walls and houses excavated during construction of the present Cotton College's auditorium suggest that it was a city of great size with economic and strategic importance until the 9th-11th century AD.During medieval times between the 12th and 15th centuries AD, after the destruction of the Kamata kingdom, the city lost its earlier glory and became mainly a strategic outpost of the Koch Hajo and Ahom kingdom. When the western part of the Koch Kingdom (Koch Bihar) fell to the Mughals, the eastern half (Koch Hajo) eventually became a protectorate of Ahom. Although the border between the powers (Ahoms and Mughals) fluctuated between the Kartoya river (now in North Bengal) to the Manas and Barnadi rivers, Guwahati remained an important outpost.The city was the seat of the Borphukan, the civil military authority of the Lower Assam region appointed by the Ahom kings. The Borphukan's residence was in the present Fancy Bazaar area, and his council-hall, called Dopdar, was about 300 yards (270 m) to the west of the Bharalu stream. The Majindar Baruah, the personal secretary of the Borphukan, had his residence in the present-day deputy commissioner's residence.(Baruah 1992:200–201)The Mughals tried to invade Assam 17 times and each time they were defeated by the Ahoms led by the great Ahom general Bir Lachit Borphukan. The Battle of Saraighat fought close to Guwahati in 1671 is the most well-known of all those battles; the Mughals were overrun due to the strong leadership and hard work of Lachit Borphukan. Brahmaputra and was an ancient boat yard probably used by the Ahoms in medieval times. Moreover, there are many tanks, temples, ramparts, etc. in the city. The most important archaeological site is the Ambari excavation site close to Dighalipukhuri.Guwahati means place of sunrise.A new cantilever bridge across river Brahmaputra has been planned to link North Guwahati. 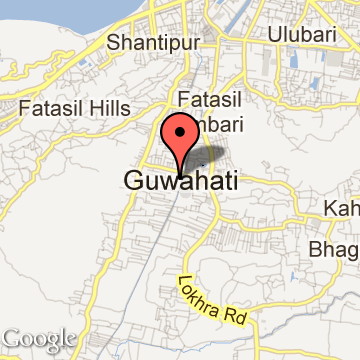