Bongaigaon is a city that is located in the Bongaigaon district of the state of Assam. The city is a reasonably well developed industrial center and it is famous for its petro-chemical industries. The place is being promoted as a tourist spot and there are a few places that one can visit while traveling to the city of Bongaigaon. The region is lush green and much of its natural beauty is still intact despite the industrial nature of the place. The main places of interest in the town are Bageswari Hill and the Bageshwari Temple. These are extremely popular among the tourists and are among the most visited sites in the area. One can also visit the Town Park that is located in the center of the city. Kayakujiya Bill is located around 16 km from the town of Bongaigaon and this is a popular tourist attraction. The place is visited by many foreign and local tourists alike every year. It is known for its natural scenery and there are many species of birds that are present in small islands that can be seen here. There are a few hill and stone carvings that can be seen in the district as well and these are also worth visiting.

Must See Places in Bongaigaon, India

Hitherto referred, Bijni Kingdom was first establishment by Koch Rajbongshi King Maharaj Bijit Narayan alias Chandra Narayan in 1671 comprising the area of undivided Goalpara district. Maharaj Chandra Narayan was the son of Parikshit Narayan who was the grandson of Yuvaraj Sukladhwaj alias Prince Chilarai, the world hero (1510-1571 AD). He was the younger brother of Maharaj Naranarayan, the great emperor of Kamrup Rajya alias Kamata Empire alias Koch Empire of 16th century. The first capital of Bijni Kingdom was at modern "Bijni" town from 1671 to 1864 and thereafter shifted to Dumuria (now known as Dalan Bhanga) due to attack by Jhawlia Mech - a local chief under Bhutan Kingdom. The big and dreaded earthquake occurred at 5 PM, on 12 June/1897 badly damaged the royal palaces of Dumuriya caused the shifting of the Capital temporarily to Jogighopa and thereafter permanently shifted to Deohati forest area now known as Abhayapuri named after Rani Abhayeswari in 1901, which continued up to 1956 when Govt. of India took over this Rajbongshi Kingdom. At present Bongaigaon district is having three Civil Sub-Divisions, namely (1) Bongaigaon with Hd. Qr. at Bongaigaon (2) North Salmara with Hd. Qr. at Abhayapuri town and (3) Bijni with Hd. Qr. at Bijni town.90% area of Bongaigaon district belonged to erstwhile Bijni Kingdom and 10% area from Sidli Kingdom and it is ruled by KochRajbongshi Kings, Raja Bhairabendra Narayan Bhup Bahadur and Raja Ajit Narayan Dev were the last kings of Bijni and Sidli Kingdoms respectively.Joy Narayan, Shiv Narayan, Bijoy Narayan, Mukunda Narayan, Haridev Narayan,Indra Narayan,Amrit Narayan. Kumud Narayan and Rani Abhayeswari were the Kings and queen in between the founder king Chandra Narayan and the last king Bhairabendra Narayan of Bijni Kingdom. 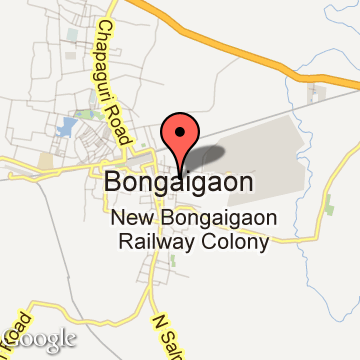