Barpeta is a town that is located in the Barpeta district of the state of Assam. The town is a popular tourist destination and one can see many people from various parts of the country through the year in this place. The place has always had religious importance and contains many historical and religious places. Many sataras are located in the town of Barpeta and these are good places to visit while, traveling to the region. Some of the main sataras are Moinbari Satara, Barpeta Satara, Kanara, Baradi, Sundaridia, Jania, Patbaushi and Ganakuchi. The place also has a rich cultural heritage and many forms of dance can be seen in the place. One can also see different forms of traditional and ethnic arts during the festival season. During the Doul festival one can witness the Holi Geet, which is a form of chorus singing. The place is also famous for its arts and crafts; there are many centers that are located in and around the town that make traditional carvings out of wood. One can also find ivory carving centers in the town. These can be purchased as souvenirs. You can also find many traditional paintings in the town of Barpeta.

Must See Places in Barpeta, India

Barpeta has been a place of great religious importance. Known by various names like Tatikuchi, Porabhita, Mathura, Vrindavan, Choukhutisthan, Nabaratna-Sabha, Icchakuchi,Pushpak Vimana, Kampur and Barpeta. It was Koch King Naranarayan who founded Barnagar (Sorbhog) The present District formed an integral part of the Koch-Hajo and the Ahom Kingdom till British Administration took over. From the ancient period Barpeta witnessed the rule of the Varmans (380-654) the Salasthamas (655-985) the Palas (985-1260) the Kamatas (1260-1509)& the Koches from 1509. During the Kamata & Koch rule major historical development took place. During this period large number of local feudatory-chiefs who are primarily land lords called 'Bhuyans' ruled the region. Number of villages constituted a 'Chakla' placed under a Bhuyan was patronised by the Kamatas. These Bhuyans arrived from eastern part of India like Kanauj, Gauda and Bengal who in passage of time became general Assamese caste and accepted the Vaishnava faith under influence of Shrimanta Sankardeva.

Koch King Naranarayan established his temporary capital at Barnagar. Here he met Shrimanta Sankardeva and his renowed disciple and sub-sequently accepted Vaishnavism when Sankardeva was invited by the monarch to Koch- Bihar. It was during king Naranarayan's regime at Barnagar the great saint established Satra at Patbaushi to spread his Socio-religious faith. The Koch rule ended with annexation by the Mughals. The valiant Ahom fought a number of battles against the invading Mughals. Some of the well-known battles were fought at Jakhlikhana, Bhabanipur and Bhatekuchi. Ahoms were defeated and Mughals took over the Administration and systematised the entire revenue adminstration. Kamrupa became a Sarkar,which was divided into Parganas. Barpeta,Khetri, Bajali, Barnagar, Bahbari and Bijni became Parganas. A Gomasta was appointed to run the 'Tapa' and a number of Tapas bacame a Pargana. For administrative convenience the Parganas were divided into Taluks, lats and villages. Parganas were placed under Barbaruas and Choudhuries. Taluks remained under Talukdar. They were assisted by Thakurias, Patwaries, Kakati, Gaon barika etc. who kept the revenue accounts. Judges in Parganas were called Shikdar,whereas Amin and Kanango were responsible for land-survey, assessment and collection of revenue.

With the advent of Shrimanta Sankardeva, this region turned into a religious place dotted with numerous satras and in fact Barpeta town came to be called 'Boikumthapuri Dham'. As a part of providing pantronage to various religious-places irrespective of religions, the Ahom rulers provided a large number of land-grants to the Satras. Dr. Maheswar Neog in his edited work" Prasya Sasanawali" has mentioned a large number of land-grants during the region of Shiva Singha,Rajeswar Singha,Lakshmi Singha,Gaurinath Singha and Chandra Kanta Singha. Grants were made to Muslim-Darghas of Shah Madar at Baushi, Shah Fakir at Barnagar,Panch Peer at Khetri, Syed Shahnur Dewan Fakir at Bhella, where Chandra Kanta Singha granted 100 bighas la khiraj land. Grants were made to Devalaya also. These grants were made in copper-plate inscriptions which are invaluable source of history.

Wide-spread destruction of life and property took place when the Maans invaded from Myanmar. Even the Barpeta Satra was razed to the ground during this invasion. To restore peace British army entered Barpeta to drove-off all the invaders. With the advent of British rule Mouzadari system came into effect.In 1841 Barpeta became a Civil Sub Division and John Batlor became the first administrator. As a part of policy of exploitation,land-revenue rates were suddenly enhanced which resulted in a number of peasant unrest in between 1893-94 particularly in Bajali and Sarukhetri area. Large number of arrests were carried out to foil attempts of unrest. The Lachima up rising is one such shining example of peasant revolt against British rule. Raijor Sabha constituted during this period raised the banner of revolt. 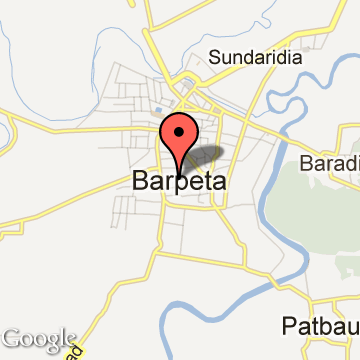