The name Golaghat ('Gola' which means shop and 'Ghat' meaning the landing point of river ferry) originated from the shops established by the 'Marwari' businessmen during mid part of 20th century AD at the bank of river Dhansiri near present Golaghat town.Stone inscription of Nagajari Khanikar gaon of Sarupathar, dating back to the 5th century, reveals that there was an independent kingdom in Doyang - Dhansiri valley and relics of ramparts, brick structures, temples, tanks etc. discovered in these area confirms the presence of a kingdom during 9th and 10th century.The Doyang – Dhansiri valley came under the rule of Ahom's during 16th century. Prior to that, this part was ruled by the Kacharis known as Herombial. During Ahom rule this area was under 'Morongi – Khowa Gohain', an administrative officer.

Must See Places in Golaghat, India

The name 'Golaghat' originated from the markets established by a business class of people called 'Marwari' (who have their origins in Rajasthan) during the middle of 19th century at the bank of the river Dhansiri in the vicinity of the district headquarters. "Gola" means market and "Ghat" means the port of river transport.Inscription on rocks of Nagajari Khanikar village of Sarupathar, remnants of fortifications, brick structures, monuments, temples, tanks, etc. are evidence of a 9th-century kingdom in the Doyang-Dhansiri valley. The Ahoms were the rulers of the Doyang-Dhansiri valley in the 16th century. Earlier, this part was ruled by the Kacharis known as Herombial. The Kacharis were pushed back towards west of the Karbi Hills. The Ahom King appointed a ruler entitled 'Morongi-Khowa Gohain', an administrative post with the Rank of a Governor/Minister of the Ahom administration. Under Morongi-Khowa Gohain, large number of people from different parts of Ahom kingdom were settled in ertswhile Kachari Kingdom. An interesting aspect of such settlement was that a large number of people from different castes/communities were mixed up together so that there was remote chance of rebellion in such newly acquired territory. Most of the Morongi-Khowa Gohain are appointed from Buragohain family although there were few exceptions. The Numaligarh was a Fort built by Numal Gohain, a young Ahom prince, which served as the administrative headquarter of the 'Morongi-Khowa Gohain' and also as a border trade post with the Nagas, Kacharis, Dimasas and other such hill people.Later, when the British took control of Assam, the Doyang-Dhansiri valley was incorporated under the newly formed Golaghat subdivision of the Sibsagar district in 1846. Golaghat district played an active part in the freedom struggle of India. Kushal Konwar, Kamala Miri, Dwariki Das, Biju Vaishnav, Sankar Chandra Barua, Shri Tara Prasad Barooah, Rajendra Nath Barua, Gaurilal Jain, Ganga Ram Bormedhi and Dwarikanath Goswami are eminent freedom fighters of the region.Golaghat was raised to the position of a district of Assam on 15 August 1987, when it was split from Sibsagar district. 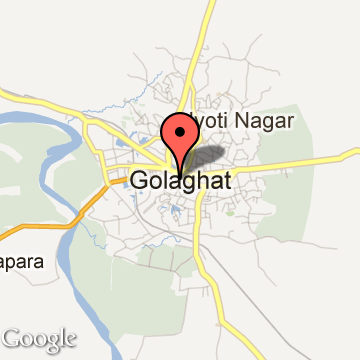