The town of Hajo is located in the Indian state of Assam. This town is located near the Brahmaputra River, and it is a very famous destination among pilgrims. There are many ancient temples in this area, and many sacred artifacts are present in the region as well. Tourists also flock to this town during the peak pilgrim season, and the place is generally crowded during this time due to the influx of Muslims, Buddhists and also Hindus. The town lies at a distance of around twenty four kilometers from the main city of Guwahati, and it is located in the Kamrup district.
During your trip to Hajo, you can visit the Hayagriva Madhava Mandir. This temple was constructed by Pramatta Singha, who ruled the region of Assam for a brief while. This is the most famous temple in the region of Hajo that attracts the maximum number of pilgrims. It is a stone temple, and it is also famous among Buddhists because they regard the temple as the spot where Buddha attained nirvana. You can also visit the Shiva temple that is located in the region during your trip to Hajo. The Kedareswara temple, as it is also known, has many ancient inscriptions that will surely attract history buffs.

Must See Places in Hajo, India

Hajo, an ancient place of immense historical importance is a living example of integration. It is one of the most interesting places in Assam and perhaps the only place in the state where one may find shirines and temples dedicated to Vishnu, Siva, Durga, the Buddha and a Muslim saint. It is the  confluence of three major religious orders of the world - Hinduism, Islam and Buddhism . People belonging to each of the three religious orders consider Hajo as a sacred place. Hajo was under the rule of different royal powers from early period of history to the late medieval period. It was an important seat of rule of three powerful royal camps of medieval Assam. i.e The Kochs, Mughals and the Ahoms.  The Hayagrib Madhab temple is one of the oldest temples of the country. The temple which is situated on a small hillock ,is a unique architectural marvel .Far from the madding crowd, the temple is a place of peace, serenity and heavenly bliss.
Hajo's historical importance is quiet interesting .This peaceful hamlet, as it stands today , was the capital of the Koch Dynasty Raghudev, the son of the legendary Koch hero Chilarai and the nephew of king Naranarayana of Kochbehar, established a separate Koch Kingdom with Hajo as its capital during the 16th century.
The kingdom of Koch Hajo covered a vast area covering Goalpara,North Kamrup and a portion of the eastwhile Darrang district.Its eastern border Barnadi river down to the Sankosh river on the west.The present-day Mangaldoi subdivision was once a part of the then Koc Hajo kingdom.During the 17th century, the mastery of Koc Hajo alternated between the KOces,the Mughals and the Ahoms.However it was under continuous occupation of the Mughals from 1639 to 1658.z
Hajo is known in different names in the different phases of its ever changing  history. In the 11th century AD , Hajo was described in the Kalika Purans as Apurnabhava and Manikuta. In the 14th Century AD Hajo is called Bishnupuskar as described in the Yoginitantra, while in the 18th century is was described as Manikutgram as found in the Darang Rangbonshabali by one Surjyakhari Daivajna. During the Ahom period, Hajo was known in its present name. The histories written in the period make abundant mention of Hajo, while during the Mugal period it was known as Sujabad or Sujanagar. Ananta Kandali, one of the illustrious Vaishnavite poets of Assam called Hajo in its present name.
Scholars and linguists hold different opinions regarding the name of Hajo. Some of them associate Hajo with 'haj', the most sought after pilgrimage of the Muslim community to Mecca, being in most cases once-in-a-lifetime affair. Dr. Banikanta Kakati suspects Hajo to be a Bodo place name 'Ha' means land in Bodo, 'Gojou' means high. 'Ha-gojou' came to be known as Hajo.
We can add to this the popular legends connected with the name of Hajo. People professing Buddhism often tend to believe that Gautam'a Buddha died in Hajo. His death pained his disciples, who in their painful ecstasy said "Ha-ju' , meaning the setting of the Sun. A section of scholars belive that there are abundant circumstantial evidences to establish that Hajo is named after the Mech King Haju, who probably ruled in the 15th century A.D. 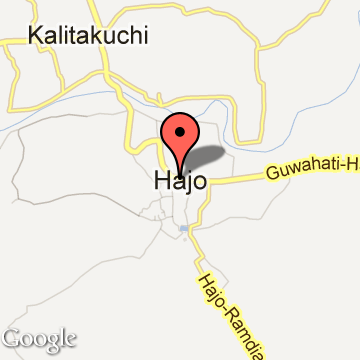