Firozabad is a city in India, in the state of Uttar Pradesh.
The ancient name of this town was Chandwar nagar; it is said that once in reign of Akbar the great, revenue was being brought through the city. it was looted by the people who lived here. Akbar when came across it sent his army comprising an unch named "firoz" to make the city a cantonment to improve thieves who lived here. The tomb of this firoz is still present near bus stand, today also. From the earliest it was famous for glass and bangle works, and its related small scale industry is famous throughout the world. Due to underdeveloped industry, literacy rates are very low. The city suffers[clarification needed] from low literacy and pollution.the landowner of firozabad sayed,manihar ,pathan and hindu rajpoot castes

The boundaries of Firozabad district touch Etah district in north and Mainpuri and Etawah districts in the east. The Yamuna river makes its southern boundary. The area of the district is about 0.8% of total area of Uttar Pradesh, and the population is 1.1% of the state's total population. Approximately 73.6% of the population lives in rural area. More than half of the workforce is engaged in manufacturing activities. The city is also an important market center. It has severe winter and summer seasons. The district is mostly flat and its slope is from north west to south. Child labour is practiced widely in this city.

Must See Places in Firozabad, India

In 1857, manihar of Mainpuri, Jamidar of Chandwar with local Mallahs took active parts in freedom struggle. Famous Urdu poet Munir Shikohabadi too was sentenced to Kala pani by the British East India Company government. People of this city took part in "Khilafat Movement", "Quit India Movement", and "Namak Satyagrah" and went to the jail during these national movements. In 1929, Father of Nation Mahatama Gandhi, in 1935 Khan Abdul Ghaffar Khan, in 1937 Pandit Jawahar Lal Nehru and in 1940 Subhas Chandra Bose visited Firozabad. Firozabad district was finally established on 5 February 1989. 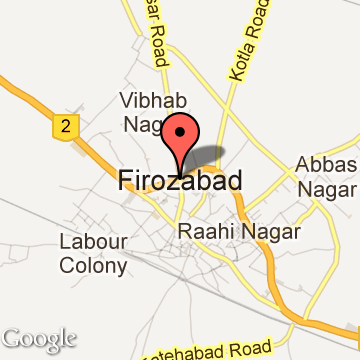