Kaithal is a city and a municipal council in Kaithal district in the Indian state of Haryana. Kaithal was previously a part of Karnal District and later, Kurukshetra District until 1 November 1989, when it became the headquarters of the Kaithal District of Haryana. Kaithal shares common boundary with Patiala (Punjab), Kurukshetra, Jind and Karnal. Kaithal district is situated in the North-West of the Haryana state. Its North-West boundaries which include Guhla-Cheeka is attached to Punjab State.

Must See Places in Kaithal, India

Historically, it was known as Kapisthal, meaning "Abode of Kapi", another name of Lord Hanuman, and it is said to have been founded by the Pandav Emperor, Yudhisthira of Mahabharata. It is traditionally connected with Hanuman, and has a temple dedicated to Anjani, the mother of Hanuman. It is also said that it is the birthplace of Lord Hanumana and there is a temple constructed at that place known as "Anjani Tila" among the residents of Kaithal.


Timur stopped here in 1398, before attacking Delhi. Later, the city became a Muslim cultural centre, under the rule of Delhi Sultanate. Tombs of several Sufi saints dating from the 13th century can be found in the city today; most important among them is that of Sheikh Sala -ud-din of Bhalkh (1246 CE). The town was renovated and a fort was built during the rule of the Mughal Emperor, Akbar, and as per Ain-i-Akbari, it was a pargana, under the sarkar of Sirhind, and had developed into an agricultural centre

Razia Sultana, the first woman ruler of India, reigned as the Sultana of Delhi Sultanate from 1236 to 1240. She fled Delhi with Malik Altúniya after they were defeated on the 24th of Rabí'u-l awwal A.H. 638 (Oct. 1240), and reached Kaithal the next day, where their remaining forces abandoned them, and they both fell into the hands of the Hindus and were killed on Nov. 13, 1240. Tomb of Rajia Begam is still found here. This aspect is still not well known outside Kaithal, but residents know about the mazaar of Razia Begum even generations later. The kaithal has many gates made by British rulers and used to control the entry of trade goods and other items. 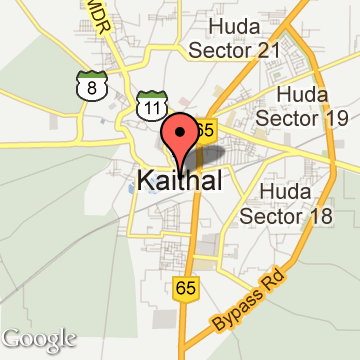