In the past three centuries Hisar had also been the birthplace for great personalities, like Sardar Ishri Singh, Sardar Harji Ram, Rai Bahadur Sardar Nau Nihal Singh (honorary magistrate of Hisar pre-Independence). It is one of the most historic features along with the Gujari mahal in Hisar District. Noteworthy individuals include late Dr. Gopi Chand Bhargava the First Chief Minister of Punjab, Late O.P. Jindal, former chairperson of Jindal Industries, Subhash Chandra, Chairman Essel Group (Zee Network). He is also chairman of Indian Cricket League. Another notable individual is Yash Tonk, actor in Bollywood, alumnus of Campus School, CCSHAU. Famous theatre director Manish Joshi Bismil also belongs to Hisar, alumnus of K.L Arya DAV Public School. It is also known as the steel city because of the Jindal Stainless Steel Factories. It also produces a large amount of galvanized iron, which is the largest production in India.

Hisar is one of the five cities belonging to Indus Valley civilization. Name of this city is cited in the history books in the contexts of Indus civilization and in General knowledge books for having one of the five Sheep Farms. Its name was Banwali.

Must See Places in Hissar, India 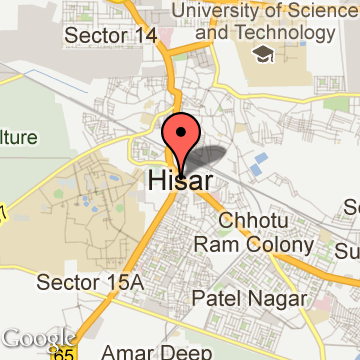