Gurgaon is the second largest city in the Indian state of Haryana, and near Delhi. Gurgaon is the industrial and financial centre of Haryana. It is located 30 km south of national capital New Delhi, about 10 kilometers from Dwarka Sub City and 268 km south of Chandigarh, the state capital. Gurgaon is one of Delhi's four major satellite cities and is part of the National Capital Region (India). Gurgaon is connected to Delhi via an expressway (NH8 highway) and Delhi Metro.

Must See Places in Gurgaon, India

In historically verifiable times, Gurgaon has been under the control of a succession of rulers appointed by the ruling power in Delhi including Yaduvanshi Rajputs, Mughals, Marathas in this order. For a few years Farrukhnagar was taken from the Nawab and Ghasera from the Badgujar Rajput Rao Bahadur Singh of Ghasera by Jat Maharaja Suraj Mal of Bharatpur Kingdom in 1753 and held till 1763. Rewari was ruled under Khoro clan Ahir rulers. It remained under the rule of the Scindhia clan of the Maratha Empire, until in 1803, the East India Company took control of Gurgaon through the Treaty of Surji-Anjangaon after the Second Anglo-Maratha War. By the mid nineteenth century Gurgaon was part of the princely protectorate of Pataudi which is a part of Gurgaon district today. The British integrated Gurgaon into the Punjab Province where it served as district and tehsil headquarters. After India's independence, Gurgaon continued to be a part of the state of Punjab until 1966 when Haryana was formed a separate state.

Gurgaon remained a small farming village in the neighborhood of Delhi India's political capital. The launch of the automotive company Maruti jump started Gurgaon's growth and changed its future. In addition, Delhi's economic rise attracted a large influx of labourers from neighboring regions like Rajasthan, Odisha and Bihar, rapidly increasing Delhi's population By the early 1990s, Delhi was one of the most populous and crowded cities in the world and the need for a satellite city became more apparent. Gurgaon seemed like an ideal choice given its vast undeveloped farming lands and proximity to Delhi. Haryana Urban Development Authority bought large areas of land from farmers in Gurgaon and developed residential and commercial sectors.

In the 1990s the Government of India reformed the tax laws, thereby attracting private companies to build world-class buildings in Gurgaon. The close proximity of Delhi International Airport also attracted private firms. The recent completion of the privatized Delhi-Gurgaon expressway provides Gurgaon with world-class connectivity to Delhi International Airport, which has in turn attracted even more firms to locate their offices in Gurgaon. 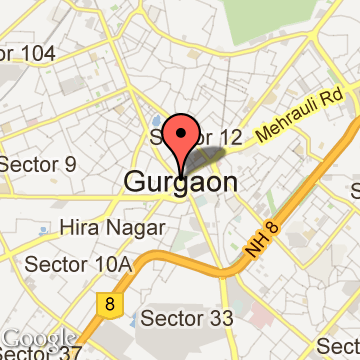