Being situated on the borderline of the two states of Haryana and Punjab, Ambala is a beautiful city and a Municipal Corporation in the district of Ambala. Tourism in Ambala has seen a huge increase in the number of visitors from all around the country. Situated on the Sher Shah Suri Marg also known as National Highway1 is the Gurudwara Manji Sahib. The holy shrine was constructed as it was visited by the sixth Guru, Guru Hargobind Singh on the way to meet Mughal emperor, Jahangir. There are as such a number of places in and around Ambala where people used to visit in large numbers.

Bhawani Amba Temple devoted to goddess Bhawani, is one of the major attractions of the city. Badshahi Bag Gurudwara, Labhuwala Talaah, Sis Ganj Gurudwara and Sangat Sahib Gurdwara are some of the several Gurdwaras which are found in the region. The City Park is situated in Ambala City and the Subash Chandra Bose Park is situated in Subhash Colony. These parks are considered as the major attractions of the city.

Ambala tourism is a real delight for the visitors and the city appears even more beautiful because of its awesome attraction points. Located near Buria is Rang Mahal, which is well crafted palace with arches of stones and pillars, intricate design and carvings. Saint Paul's Church, Kali Mata Mandir and popular holy shrines of Lakhi Shah and Taqwal Shah are some of the religious spots which have thousands of visitors on regular basis. Ambala’s planetarium is one of the country’s first planetariums, established in 1950s. Pandit Jagannath Sharma has designed the planetarium and has also built the telescope for seeing moon craters, polar caps of Mars and the satellite of Jupiter. Being regarded as one of the most revered worship centers in the region, Jain Mandir is believed to house idols that date back to a period of some 2,500 years Ambala Tourism - MakeMyTrip is the one stop destination for Ambala Holidays & Ambala tourism packages with wide range of Holiday Package deals. Ambala is famous spot for tourism as provides various tourist attractions for people for their Ambala Holidays.

Must See Places in Ambala, India 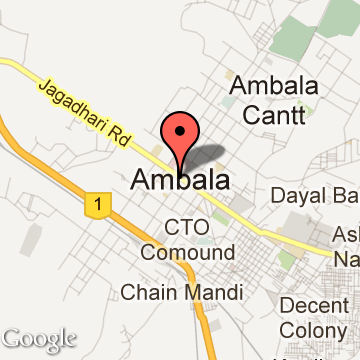