Bahadurgarh was founded by Rathi Jats and formerly known as Sharafabad. It is situated twenty-nine Kilometres from Delhi and had developed into an important industrial centre.

Known as the "Gateway of Haryana," Bahadurgarh is both a city and a municipal council located in Jhajjar, a district in the state of Haryana, India, which comprises 31 wards.

Bahadurgarh is one of the fastest developing towns in the NCR region.It is located to the west of Delhi on the National Highway Number 10. Bahadurgarh is gaining popularity as a residential locale for businessmen and public sector employees working in Delhi. Ongoing Kundli Manesar Palwal Highway, Reliance Sez & Yokohama Plant are going to play a vital role in the development of Bahadurgarh.

Must See Places in Bahadurgarh, India

The city was founded by Mughal Emperor Alamgir II, who was the Sultan of Delhi from 1754 to 1759. He gave the town in jagir to Bahadur Khan and Tej Khan, Baloch rulers of Farrukhnagar in 1754, who changed its name from Sharafabad to Bahadurgarh. They also constructed a fort named Bahadurgarh Fort.

Bahadurgarh came into the hands of Sindhia in 1793. After Sindia's defeat in 1803 at the hands of the British, Lord Lake transferred control of the town's government to the brother of the Nawab of Jhajjar. Power was taken back after the First War of Independence (1857), when the town became a division of the Rohtak district in 1860. In 1997, the town was attached to Jhajjar after it bifurcated from Rohtak and became a new district. The town, and its villages, have been the birthplace of martyrs and heroes of the Indian armed forces. 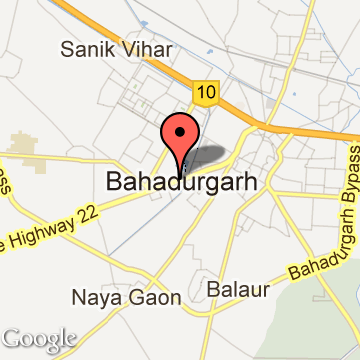