Bathinda (Template:Punjabi) (many institutions still use its old, now unofficial spelling, Bhatinda), named after the Bhati Rajput kings, is one of the oldest cities in Punjab, India and the current administrative headquarters of Bathinda District. It is in northwestern India in the Malwa Region, 225 km west of the capital city of Chandigarh. Bathinda is nicknamed the 'City of Lakes' and was once known as Tabar-e-Hind (or Tabarhindh), meaning the Gateway to India. The first empress of India, Razia Sultan was imprisoned in the Qila Mubarak fort in Bathinda.

Bathinda is home to two modern thermal power plants, Guru Nanak Dev Thermal Plant and Guru Hargobind Thermal Plant at Lehra Mohabbat. The city has a fertilizer plant, a large oil refinery, a zoo, and a historic Qila Mubarak fort. Bathinda is one of the largest food grain and cotton markets in northern India; the area around Bathinda is a prolific grape growing area. It is one of the leading cities in education in Punjab.

Must See Places in Bhatinda, India

The etymology of "Bathinda" is uncertain. According to Khalifa Muhammad Hassan, author of History of Patiala, the ancient name of the city was Bikramgarh. According to Ibn Battuta it was known as Batrind. It is generally believed that Bathinda was built by Bhati Rajput kings, who were the rulers of Punjab in 6th century AD. They called the city Whatinda or Bitunda after their surname which finally become known as Bhatinda. Bhatinda was changed to Bathinda to conform to the phonetical expression as locally pronounced. According to Henry George Raverty, Bathinda was known as Tabarhindh (Labb-ut-Twarikh). The earliest mention of Tabarhindh occurs in the Jami-Ul-Hakayat written about 607 Hijri or 1211 AD.

The city was under the rule of Hindu shahi king Jayapala in 965 AD. Emperor Jayapala was challenged by the armies of Sultan Sabuktigin and later by his son Sultan Mahmud of Ghazni. In 1004, Mahmud of Ghazni besieged the local fort, which was located on the route from the northwest into the rich Ganges valley.

In 1189, Muhammad Ghori attacked and occupied the fort of Bathinda. Prithvi Raj Chauhan, the ruler of this region, managed to recover possession of the fort thirteen months later in 1191 after the first battle of Tarain.

After the death of Muhammad Ghori, Delhi Sultanate was established. The fourth Emperor - Iltutmish, on his death-bed nominated his daughter Raziya as his heiress. Raziya became the next and the first Empress of India and was known as Razia Sultan. Her childhood friend named Malik Altunia, the governor of Bathinda, joined a rebellion by other provincial governors who refused to accept Razia's authority. She was imprisoned at the Bathinda fort in April, 1240. She was released in August and later died in October 1240. While in prison Razia Sultan was allowed to go to Hajirattan mosque to offer prayers on Fridays in a special palki.

The city later came under the control of the Sidhu-Brars, who were thrown out of Bathinda during Lodhi's rule but were restored to the area by Babur. A few years later, Chaudhary Roop Chand Brar, a Jatt Sikh, came into the scene. Chaudhary Phul Brar, the second son of Chaudhary Roop Chand, started the practice of langar (community kitchen) for the people in the Lakhi jungle area. The city of Bhatinda was visited by the tenth Sikh guru Guru Gobind Singh. He halted at the mausoleum of Haji Rattan, a celebrated Muslim saint, which was 2 km outside the city. He visited and surveyed the strategic importance of the Bathinda Fort.

In circa 1754, the town was conquered by Maharaja Ala Singh, the Maharaja of Patiala and since then it followed the history of erstwhile princely state of Patiala. With the dawn of independence and merger of Patiala and East Punjab States into a division called PEPSU, Bathinda become a full-fledged district with headquarters at Bathinda city. 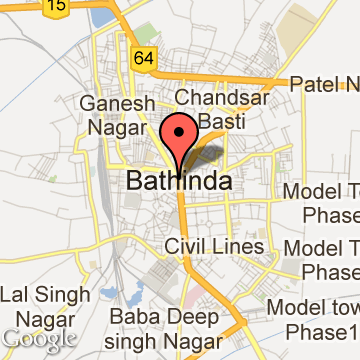