Hoshiarpur is a district of Punjab state in northern India. Hoshiarpur, one of the oldest districts of Punjab, is located in the North-east part of the Punjab state and shares common boundaries with Gurdaspur district in the north-west, Jalandhar and Kapurthala districts in south-west, Kangra and Una districts of Himachal Pradesh in the north-east. Hoshiarpur district comprises 4 sub-divisions, 10 community development blocks, 9 urban local bodies and 1417 villages. The district has an area of 3365 km2. and a population of 14,80,736 persons as per census 2001.

Hoshiarpur along with the districts of Nawanshehar, Kapurthala and parts of Jalandhar represents one of the cultural region of Punjab called Doaba or the Bist Doab - the tract of land between two rivers namely Beas and Sutlej. The area along with the Shivalik foothills on the right side of Chandigarh-Pathankot road in Hoshiarpur is submountainous and this part of the district is also known as Kandi area. The two rivers, Sutlej and Beas along with two other seasonal streams provide drainage to the region. Besides these, the Kandi region is full of seasonal streams.

It falls into two nearly equal portions of hill and plain country. Its eastern face consists of the westward slope of the Solar Singhi Hills; parallel with that ridge, a line of lower heights belonging to the Siwalik Range traverses the district from south to north, while between the two chains stretches a valley of uneven width, known as the Jaswan Dun. Its upper portion is crossed by the Sohan torrent, while the Sutlej sweeps into its lower end through a break in the hills, and flows in a southerly direction until it turns the flank of the central range, and debouches westwards upon the plains. This western plain consists of alluvial formation, with a general westerly slope owing to the deposit of silt from the mountain torrents in the sub-montane tract. The Beas has a fringe of lowland, open to moderate but not excessive inundations, and considered very fertile. A considerable area is covered by government woodlands, under the care of the forest department. Rice is largely grown, in the marshy flats along the banks of the Beas. Several religious fairs are held, at Anandpur Sahib, Dasuya, Mukerian and Chintpurni, all of which attract an enormous concourse of people. The district, owing to its proximity to the hills, possesses a comparatively cool and humid climate. Cotton fabrics are manufactured, and sugar, rice and other grains, tobacco and indigo are among the exports. Hoshiarpur is also known as a City of Saints. There are many Deras in this district. The District Govt. College was once a campus for Punjab University.

Must See Places in Hoshiarpur, India

The area of present Hoshiarpur District was also part of Indus Valley Civilization. Recent excavations at various sites in the district have revealed that the entire area near the Shivalik foothills was selected for habitation not only by the early Paleolithic man but also by those in the protohistoric and historic periods. The legends associate several places in the district with Pandavas. Dasuya is mentioned in epic of Mahabharata as the seat of Raja Virata in whose services the Pandavas remained for thirteen years during their exile. Bham, about 11 km west of Mahilpur, is said to be the place where the Pandavas passed their exile. Lasara, about 19 km north of Jaijon, also contains a stone temple stated to date back to the time of Pandavas. According to the Chinese pilgrim, Hieun Tsang, the area of Hoshiarpur was dominated by a tribe of Chandrabansi Rajputs, who maintained an independent existence for centuries before the Muhammadan conquest.

The country around Hoshiarpur formed part of the old kingdom of Katoch in Jalandhar. The state was eventually broken up, and the present district was divided between the, rajas of Datarpur and Jaswan. They retained undisturbed possession of their territories until 1759, when the rising Sikh chieftains commenced a series of encroachments upon the hill tracts. In 1815 Maharaja Ranjit Singh, forced the ruler of Jaswan to resign his territories in exchange for an estate on feudal tenure; three years later the raja of Datarpur met with similar treatment. By the close of the year 1818 the whole country from the Sutlej to the Beas had come under the government of Lahore, and after the First Anglo-Sikh War in 1846 passed to the British government. The deposed rajas of Datarpur and Jaswan received cash pensions from the new rulers, but expressed bitter disappointment at not being restored to their former sovereign position. Accordingly the outbreak of the Second Anglo-Sikh War, in 1848 found the disaffected chieftains ready for rebellion. They organized a revolt, but the two rajas and the other ringleaders were captured, and their estates confiscated. Hoshiarpur is an ancient centre of Hindu epics and culture itself. In Bajwara (4 km east on Una Road from the present city) ruins of an ancient culture can still be found. Mythologically, Teh Dasuya of this district is estimated to be King Virat's kingdom where Pandavas spent their one-year exile. 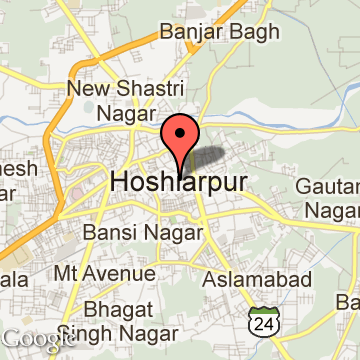