Firozpur  is a city on the banks of the Sutlej River in Firozpur District, Punjab, India, founded by Sultan Firoz Shah Tughlaq (1309–88), a Muslim ruler of the Tughlaq Dynasty who reigned over the Sultanate of Delhi from 1351 to 1388. The Manj Rajputs say the town was named after their chief, a Rajput of the Bhatti clan called Feroze Khan, in the middle of the 16th century. Firozpur is called ‘Shaheedon ki dharti’ (the land of martyrs).

Ferozpur today is a transportation and administration center and an ancient city. It is a border town on the Indo-Pakistan border with memorials of India's freedom fighters.

Firozpur also holds a historic place in Indian history as it was there that British Raj established control over much of North-West India as well as what is now Pakistan through the Anglo-Sikh Wars that were fought in this region. Today it is the headquarters of a brigade of the Northern Corps of the Indian Army. Shaheed Bhagat Singh College of Engineering and Technology is located at Moga road in Firozpur. It is a government Engg. College and has an excellent reputation. Firozpur Cantonment is adjacent to and south of the city; during British times it was one of the largest cantonments in the country.

Firozpur has easy access by road and rail to other places such as Amritsar, Ludhiana, Jalandhar, Delhi, and Chandigarh; the city is a center of numerous holy shrines and historic places. At the nearby city of Zira, a Jain Swetambar Temple with ancient brass icons and wall murals is located.

In addition to cotton and grain cultivation and agriculture-related services, Firozpur has some light manufacturing. Commercial progress has been restricted by its vicinity to the border with Pakistan. Normalizing relations between the two nuclear nations promises to raise the city's profile as a potential trade hub. Firozpur is the oldest British district of the Punjab, established in 1833 as district headquarters even well before Ludhiana and Amritsar became districts. Firozpur district even after partition included many areas which were later reorganised to be a part of the Faridkot, Moga, Muktsar and Bathinda Fazilka Districts. The per hectare wheat yields of this district are comparable to the best in the world and they matched wheat yields per hectare of Ontario Province in Canada.

Must See Places in Ferozepur, India

Ferozepore is an ancient city situated close to the present day Indo-Pakistan border. It is believed to have been founded by Ferozeshah Tughluq in the 14th century. Another version claims that it was founded by a Bhatti chief called Feroze Khan. However, the first version is more widely accepted as Ferozeshah Tughluq had a passion for building new cities and renaming old ones especially after his own name. He claimed, "Among the many gifts which God bestowed upon me, His humble servant, was a desire to erect public buildings. So I built many mosques, colleges and monasteries, that the learned and the elders, the devout and the holy, might worship God in these edifices and aid the kind builder with their prayers."

Ferozepore's strategic position in the northwest of the country has resulted in its being part of many military expenditions in the area. During the first Anglo-Sikh war in 1845, it due to the negligence of the British commander at Ferozepore that the Khalsa was able to cross the Sutlej unopposed. When Lord Hardinge declared war on the Sikhs, the first battle was fought at Mudki, 20 miles south-east of Ferozepore. In 1838, Ferozepore was the centre from where British troops advanced to Kabul during the rist Anglo-Afghan war.

Three heroic martyrs of India's freedom struggle Shaheed Bhagat Singh and his associates Shaheed Rajguru and Shaheed Sukhdev have their final resting place on the banks of the river Sutlej in Ferozepur. On March 23, 1931, despite popular protest, these three heros were executed in Lahore and were stealthily cremated in the dead of night near Ferozepore. They were killed for raising the flag of revolutionary terrorism against the British, displaying their deep patriotism and defiance for the foreign rulers till the very end.

Today, a Shaheed Bhagat Singh Memorial marks the spot and every year on March 23, thousands of people gather to pay homage of these noble heroes. Ferozepore has another historical memorial, the Saragarhi Gurudwara, commemorating the sacrifice of 21 Sikh soldiers who perished at Saragarhi in Baluchistan. On 12 September, every year, people gather here to pay tribute to the heroic soldiers and celebrate Saragarhi Day. The memorial service also provides an occasion for exservicemen to have a reunion. 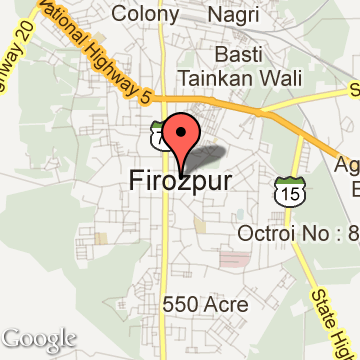