Batala  is a municipal council in Gurdaspur district in the state of Punjab, India. It is located about 30 km from Gurdaspur, the headquarters of the district. It is also a Police Tehsil.

Batala is an important place for Sikh devotees. Guru Nanak Dev, the founder of the Sikh religion was married here to Sulakhni, the daughter of Mul Chand Chauna in 1485. Many temples and Gurdwaras related to the Guru's marriage attract devotees from near and far. Every year celebrations are conducted on the anniversary of Guru Nanak's marriage. Also it is an important place for Hindus as the most powerful god of Hindu culture Lord shiva came here at mandir achleshwar dham with 33 crore devi and devtas to make happy his son kartike who was sad due to his loss of race from his brother and lord shiva's son ganesh.

Batala was once called as Iron bird of Asia as it produced highest amount of C.I.Casting, Agricultural and mechanical machinery. Batala is still one of the leading cities in northern India in maufacturing of C.I Casting and agricultural and mechanical machinery. It's an agricultural marketplace and industrial centre. Cotton ginning, weaving, sugar refining, rice milling, and manufacturing are some of other business taking place here.

Must See Places in Batala, India

The city was founded in 1465 CE by Raja Ram Deo, a Bhati Rajput, during the reign of Bahlul Lodi on a piece of land given by Tatar Khan who was the Governor of Lahore. Later, during the Mughal rule, Akbar gave it in jagir to his foster brother, Shamsher Khan. The city grew and developed under him. The whole city was lying within a fort. It had 12 gates as entrance and exit. These gates are still known by their old names e.g. Sheran wala Gate, Khajuri Gate, Bhandari Gate, Ohri Gate, Thathiari Gate, Hathi gate, Phari gate, etc. Some of them still survive and are pleading for their condition. During the Political integration of India, Batala was included in the Punjab state. Other historic Places in Batala are Gurdwaras where Guru Nanak stayed during his lifetime. There are also numerous other gurdwaras of significant importance to Sikhs and therefore attracts thousands of Sikhs from around the globe. 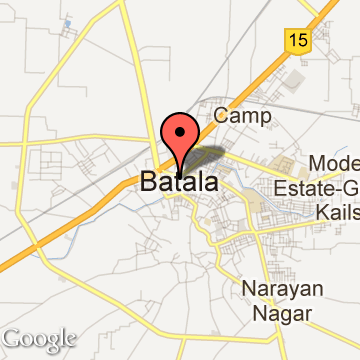