Abohar is a city in the district of Firozpur in Punjab. The city is known as California Punjab for its rich soil, good irrigation sources, and particularly for the production of knoo (a fruit of the orange family). It is a place renowned as the trinity of culture, ethinicity and civilization of Punjab, Haryana and Rajasthan.

Must See Places in Abohar, India

Abohar is a historical city. It may be called trinity of the culture, ethnicity, and civilization of Punjab, Haryana and Rajasthan as it is located near the junction of their boundaries. Its boundaries touch Rajasthan's sand dunes on one side and plains of Haryana on the other. Under British rule, in 1893 the town was more of a mound of sand with a total population of only 5,954. Its name was Kaiser-Ganj. But Maharaj Vidhata Kumar Change the Name Kaiser-Ganj to Abohar.

River Satluj streaming by its side, Abha Nagari, some 550 years ago, was a fabulous city of India. As one enters Abohar, one sees the remains of the ancient city Abha Nagri, a big mound of sand and stones which is known as Theh among local people. This mound is not just a dune of sand because a historical city and a big palace built by a Suryavanshi king Aabu-Chandni are buried under it.

Another legendary dune named ''Panjpeer'' is just 150 m (490 ft) away from Theh with tombs of five pirs on this mound. The beautiful Aabu city was destroyed by the curse of these pirs (soothsayers). A big fair is held on this mound every Thursday. King Harichand ruled Aabu Nagar after King Aabu-Chandni and had only one daughter. She was very impressive, a good shooter and fond of riding also. Once the king fell victim to leprosy. Someone told the king that he could recover only with the blood of the horses of five pirs of Multan. The brave daughter of the king snatched 81 horses of five pirs along with their goods, but king Harichand succumbed to the disease. Five pirs sent many request to get their horses back, but the princess refused to give their horses back.

There is another mound at a distance of about 60 m (200 ft) from Panjpeer, where their tombs are erected. The five pirs got angry, for not being returned their horses, and destroyed the Aabu Nagar with their divine powers, according to popular legends.

At the time of partition of India in 1947, the city witnessed bloodshed due to Hindu-Muslim riots as this was the last main town along Delhi-Bahawalpur sector. Much of the local community lives in the town with the feeling of harmony and common brotherhood today. All sections, castes, religious sects visit Panj Peer.

Many other achievements in academic, agriculture, industry, innovations, infrastructure and a big grain market are particularly noteworthy. Its main business mandi is called Darwaza.

In the dark days of terrorism in Punjab in 1990s, Abohar also saw a painful period of terrorism. In March 1990 many innocent people were killed by terrorists in Sadar Bazaar of Abohar. 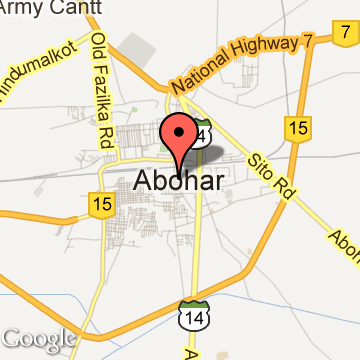