Set amidst the serenity of the Nilgiri Hills, Kotagiri is a small hill resort surrounded by lush tea estates. Kotagiri, situated 1,983 m above sea level, has a climatic advantage over Udhagamandalam or Ooty, as it is shielded by the Doddabetta ranges from the onslaught of the monsoons. Retaining the essence of hill magic and charm, the resort offers year-round clement weather and sylvan charm.
It is the third largest and the oldest hill station in the Nilgiris. Like all hill stations in India, this also has had strong presence of the British Raj. It has a Kota temple in the middle of the town, even though the Kota tribes have long moved out.

Must See Places in Kotagiri, India

Kotagiri, although having no written history of the pre-British period, has been around for a very long time. The area just below Coonoor and the slopes of the Nilgiri hills has been the traditional home of the "kota" tribes. The name ‘Kota-giri’ itself means ‘mountain of the kotas’. While the todas are the traditional agriculturists of the Nilgiris, the Kotas are the traditional artisans and are experts in the art of pottery and terracotta baking. The ‘Kota’ tribe is known for their reclusiveness and their reluctance to meet or mix with any outsider. They currently number just around a 1000 members, and are fast declining.

Kotagiri was known in the past as “Kota-Keri” or “Kota-gherry” the street of Kotas”. In fact, there was a Kota settlement there and it was only in 1911 when the lands occupied were acquired by government for sanitary improvement purposes and the Kota settlement had to be shifted, to 'Aggal' hamlet, 2 km. away from Kotagiri. The temple of the Kotas dedicated to the deity 'Kamataraya' still remains there and has been renovated. The Kotas worship at this temple every month and the annual festival which takes place on the “Arudra Dharshan” day at this temple is of great importance to all the Kotas of the district.

After the forgotten expedition made by Keys and McMohan to the Nilgiris, two civil servants of the Madras Government, J.C. Whish and N.W. Kindersley, made a journey to the hills in 1819. The exact reason for their trip remains unknown, but it possibly could have been in pursuit of smugglers. They went through pass in the hills (now the DENAD village of Kil Kotagiri), and as reported back to their superiors, had “discovered a tableland possessing a European climate”. They called the tableland ‘Kotercherry’.

Soon after, the Collector of Coimbatore, John Sullivan, himself journeyed into the hills and built himself a home in Kotagiri. He was the first European resident of the Nilgiri hills. On his suggestion, the Madras Government opened a ‘sanatorium’ in Ooty and started the practice of moving the whole government to the hills during summer. With the town becoming their personal health resort, several Englishmen followed and settled here. The environment could have been to them reminiscent of the hills and dales of old England which they had left behind for service to the King/Queen.

Nevertheless, Kotagiri remained the first choice for homesick Englishmen wanting to settle in the hills. The area was of a pleasant climate of neither extreme unlike Ooty and Coonoor, which were damper and colder. The climate was for them, ‘like home’. The plateau also had more of a warm wind than rain through the year. John Sullivan was followed by others including numerous elite like the Marquis of Dalhousie, and by the 1830s, there were some twenty bungalows built around here. They had the best of both worlds, living in Madras (now Chennai) during the winter and shifting to Kotagiri during the oppressive summers. 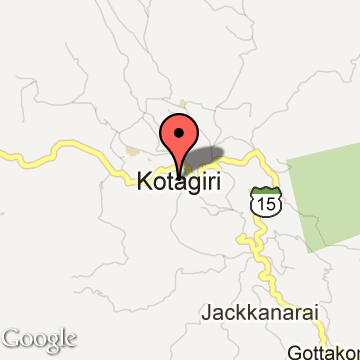