A laid-back place of immense natural beauty, Dharmapuri is a holiday destination promising visitors a wealth of history and a number of important religious shrines. Headquarters of the district of the same name, the place is famous for some exotic locales including the famed Hogenakkal waterfalls created by the descent oftheCauvery River.

Once part of the ancient Chera kingdom during the Sangam age, the place attracts those who are fascinated by history. Theerthamalai in the district is a sacred place attracting visitors for its Shiva temple. An all-time favourite, Dharmapuri must be included as a destination in a trip to Tamil Nadu.

Must See Places in Dharmapuri, India

Dharampuri and the hilly region surrounding it were historically part of the ancient Chera and Kongu kingdoms.

The earliest known chieftain who ruled Tagadur (present Dharmapuri) during the Sangam era, is Adigaman Naduman Anji, whose patronage sustained the famous poetess Avvaiyar. The next we hear in the 8th century when the northern parts of Salem District were probably under the Pallavas regime. Subsequently, we hear of the Ganga Pallavas having sway over the Western parts of the Salem District. The Western Gangas are also mentioned as having ruled Baramahal during the end of the 8th century.

In the beginning of the 9th Century, the Rashtrakutas gained power and influenced the history of the district for the next two centuries. During the period, the Cholas also rose to power in the south and Aditya-I conquered the Kongunadu in 894 A.D. During 949-950 A.D., the Cholas suffered a defeat from the Rastrakuttas whose decline started later after the death of their king Krishna-III. Subsequently, the entire area in Salem District came under the rule of the Cholas. The Gangavadi was then annexed to the Chola territory and placed in charge of an Adigaman Tagadur. The 12th century witnessed the decline of the Chola empire when the Hoysalas rose to power and routed the Cholas from Gangavadi. They are said to have captured Kolar, sacked Kotayur and overran the western parts of Kongunadu. The Baramahal and Talaget areas apparently still remained with the Cholas. But the Adigaman seems to have practically become free and owed only nominal allegiance to the Cholas. Soundrapandia-I assisted the Yadavas in driving out the Hoysala king, Vira Someswara from the Chola territory.

The history of the 13th Century revolve itself between the Hoysalas and the Pandyas. This portion may be added after when they were attacked from the North by the Yadavas, the Hoysalas retreated towards the South in Kongunadu. It is known that Jatavarman Soundrapandian-I assisted the Yadavas in driving out the Hoysalas king, Vira Someswara, from the Chola territory. But it is doubtful whether he made himself master of the Talaghat area as there are records to show that Vira Someswara's son Vira Ramanatha later ruled the whole of Salem District and the Pandiyas were then eclipsed by the Mohammadan emissaries of the Delhi Sultanate.

By about 1750 A.D., Hyder Ali was in power in Mysore Baramahal came under his sway in 1760 A.D. By 1767 A.D., the British Government at Madras planned an attack on Hyder Ali and seized Kaveripattinam without serious opposition. Krishnagiri was then besieged. Meanwhile, reinforcement was brought by Hyder Ali and they drove away the British. Thus, Kaveripattinam was recaptured. Some months later the British made another invasion on the Baramahal. Further, South Dharmapuri, Salem, Attur, Sendamangalam and Namakkal were surrendered to the British without serious difficulties. The victory, however, was short-lived because Hyder Ali soon recaptured Dharmapuri, Denkanikota, Omalur, Salem and Namakkal. During the period of second Mysore war, Salem District was in the hands of Hyder Ali.

Tippu Sultan succeeded Hyder Ali and proved to be a formidable power. The British made an alliance with the Marattas and the Nizam and started the third Mysore war in 1790 A.D., in order to curb the power of Tippu Sultan. A wing of the British forces stationed itself fully reinforced at Kaveripattinam. Even though Tippu Sultan rushed to this spot with his full force, he could not dislodge the British. A number of alternations took place between the commanding forces in the Baramahal area. In 1791, Hosur, Anjetti, Nilgiri and Ratnagiri came under the British Royakotta and many other small forts fell without much resistance. In 1791 Tippu sent a force from the South along the Tippu pass. In the battle at Pennagaram they surrendered to the British. In 1792 A.D., a peace treaty was signed between Tippu and English. According to this, a half of the dominion of Tippu was taken away. The whole of Salem District except the Balaghat and a portion of Hosur came into the hands of the British. The first British Collector had is headquarters at Krishnagiri on strategic consideration.

The last Mysore war in 1799 added up several places in Hosur Taluk like Nilgiri, Anjetti, Durgam, Ratnagiri and Kelamangalam which were recaptured by British. After the fall of Srirangapattinam in which Tippu Sultan lost his life, the Balaghat area was also added to Salem District. 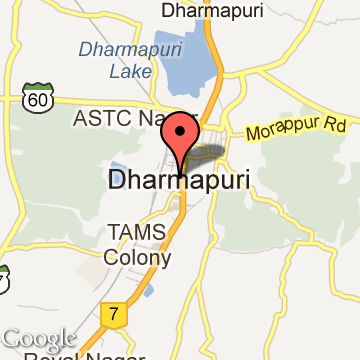