An ancient port with a flourishing maritime trade, Mamallapuram or Mahabalipuram is situated on the shore of the Bay of Bengal. It was the chief sea port of the Pallavas who ruled over South India from the 1st century BC to 8th century AD and is recognised as the site of some of the greatest architectural and sculptural achievements in India.

Under the reign of the Narasimha Varman, this seaport began to grow as a great artistic centre. Mamallapuram is a world heritage site, and a testimonial to early Dravidian style of architecture.

Must See Places in Mamallapuram, India

Megalithic burial urns, cairn circles and jars with burials dating to the very dawn of the Christian era have been discovered near Mamallapuram. The Sangam age poem Perumpanarruppatai relates the rule of King Thondaiman Ilam Thiraiyar at Kanchipuram of the Tondai Nadu port Nirppeyyaru which scholars identify with the present-day Mamallapuram. Chinese coins and Roman coins of Theodosius I in the 4th century CE have been found at Mamallapuram revealing the port as an active hub of global trade in the late classical period. Two Pallava coins bearing legends read as Srihari and Srinidhi have been found at Mamallapuram. The Pallava kings ruled Mamallapuram from Kanchipuram; the capital of the Pallava dynasty from the 3rd century to 9th century CE, and used the port to launch diplomatic missions to Ceylon and Southeast Asia.

An 8th century Tamil text written by Thirumangai Alvar described this place as Kadal Mallai, (Sea Mountain) ‘where the ships rode at anchor bent to the point of breaking laden as they were with wealth, big trunked elephants and gems of nine varieties in heaps’. It is also known by several other names such as Mamallapattana and Mamallapuram. Another name by which Mahabalipuram has been known to mariners, at least since Marco Polo’s time is "Seven Pagodas" alluding to the Seven Pagodas of Mahabalipuram that stood on the shore, of which one, the Shore Temple, survives. The temples of Mamallapuram, portraying events described in the Mahabharata, built largely during the reigns of Narasimhavarman and his successor Rajasimhavarman, showcase the movement from rock-cut architecture to structural building. The city of Mahabalipuram was largely developed by the Pallava king Narasimhavarman I in the 7th century AD. The mandapa or pavilions and the rathas or shrines shaped as temple chariots are hewn from the granite rock face, while the famed Shore Temple, erected half a century later, is built from dressed stone. What makes Mamallapuram so culturally resonant are the influences it absorbs and disseminates. The Shore Temple includes many bas reliefs, including one 100 ft. long and 45 ft. high, carved out of granite.

All but one of the rathas from the first phase of Pallava architecture are modeled on the Buddhist viharas or monasteries and chaitya halls with several cells arranged around a courtyard. Art historian Percy Brown, in fact, traces the possible roots of the Pallava Mandapa to the similar rock-cut caves of Ajanta Caves and Ellora Caves. Referring to Narasimhavarman's victory in AD 642 over the Chalukyan king Pulakesin II, Brown says the Pallava king may have brought the sculptors and artisans back to Kanchi and Mamallapuram as 'Spoils of War'.

The fact that different shrines were dedicated to different deities is evidence of an increased sectarianism at the time of their construction. A bas-relief on a sculpted cliff has an image of Shiva and a shrine dedicated to Vishnu, indicating the growing importance of these Sangam period deities and a weakening of the roles of Vedic gods such as Indra and Soma.

The modern city of Mahabalipuram was established by the British in 1827. 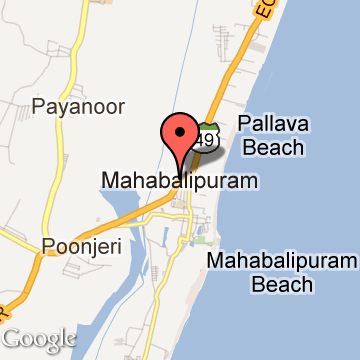