Kanchipuram, the golden city of a thousand temples, was once the capital of the Pallava dynasty. It is considered one of the seven sacred cities of India; some of the best temples were built here during the reign of the Pallavas between the 6th and 7th centuries. Subsequently, Kanchipuram also served as an important city of the far-flung empires of the Chola and the Vijayanagara dynasties.
Later, these dynasties too contributed greatly in the temple building activity of this town.
The city has also been, through the years, a great seat of learning and culture. Adi Sankaracharya established his episcopal seat (Kamakodipeedam) here. Sri Sankaracharya, Appar, Siruthonder and the great Buddhist Bikshu, Bodhidharma, once lived and worked here. Today, it is known not only for temples but also for its hand-woven, silk fabrics.

Must See Places in Kanchipuram, India

Kanchipuram was the capital of the Pallavas rulers from the 1st to 9th centuries. It was also important during the Chola, Vijayanagar, and Nayaka periods. It was mentioned in the Mahabhasya, written by Patanjali in the 2nd century BC. The term "nagareshu Kanchi" in the above verse attributed the famous Sanskrit poet, Kalidasa, means that Kanchi was the best amongst the cities of medieval India.

Kanchipuram is one of the oldest cities in South India, and was a city of learning for Tamil, Sanskrit, and Pali. It was during the reign of Pallava dynasty, from the 4th to the 9th centuries that Kanchipuram attained its limelight. The city served as the Pallava capital, and many of the known temples were built during their reign.

The king of Kanchi, Pallava Mahendravarman I was a great scholar and musician, a man of great intelligence and also a great Sanskrit satirist and playwright.

Xuanzang, the great Chinese traveler, visited the city in the 7th century and said that this city was 6 miles in circumference and that its people were famous for bravery and piety as well as for their love of justice and veneration for learning. He further recorded that Buddha had visited the place.

From the 3rd to the 9th century, Kanchi was the capital of the Pallavas who ruled over the territory extending from the river Krishna in the north to the river Kaveri in the south. The Pallavas fortified the city with ramparts, moats, etc., with wide and well laid out roads and fine temples. They were a great maritime power with contacts with far-off China, Siam, Fiji, etc., through their chief port Mahabalipuram. The Cholas ruled the city from the 10th to the 13th century. Kings of Vijayanagara dynasty ruled from the 14th to the 17th century. The temple tower, 192 feet high in the Ekamabaranadhar Temple and the 100-pillar mandabam in the Varadaraja Perumal Temple are famous for the architectural techniques of Vijayanagara dynasty. 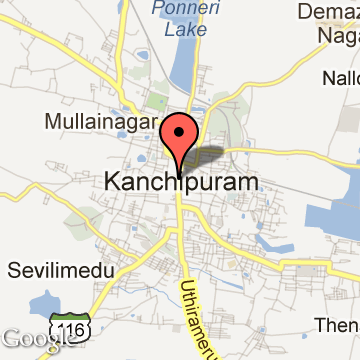