Kumbakonam is one of the oldest and holiest places in South India, held sacred by devotees of Lord Shiva and Lord Vishnu alike. This ancient town, located between Rivers Kaveri and Arasalar, is home to about 188 temples which are located in and around it.

Though the town dates back to the Sangam period, it came into prominence during the medieval Chola period in the 7th century AD and in the British period as the Cambridge of South India because of its many educational institutions. Kumbakonam is also well known for the Mahamagham festival which takes place once in 12 years.

Must See Places in Kumbakonam, India

The region around Kumbakonam was inhabited as early as the Sangam Age (3rd century BC to 3rd century AD). The present-day Kumbakonam is believed to be the site of the ancient town of Kudavayil where the Early Chola king Karikala held his court. Some scholars identify Kumbakonam as the site of the fabled prison of Kudavayir-kottam where the Chera king Kanaikkal Irumporai was imprisoned by the Early Chola king Kocengannan. Kumbakonam is identified with the town of Malaikūrram which had served as the Chola capital as early as the 7th century and with the town of Solamaligai which had also served as a Chola capital. According to the Sinnamanur plates, Kumbakonam was the site of a battle between the Pallava king Sri Vallabha and the then Pandya king in 859 and between the Pandya king Srimara Pandya and a confederacy of the Cholas and Gangas.

Following the decline of the Chola kingdom, Kumbakonam was conquered by the Pandyas in 1290. Following the demise of the Pandya kingdom in the 14th century, Kumbakonam was conquered by the Vijayanagar Empire.Krishnadevaraya, the emperor of Vijayanagara visited the town in 1524 and is believed to have bathed in the famous Mahamaham tank during the Mahamaham festival. Kumbakonam was ruled by the Madurai Nayaks and the Thanjavur Nayaks from 1535 to 1673 when it fell to the Marathas. Each of these foreign dynasties had a considerable impact on the demographics and culture of the region. When the Vijayanagar Empire fell in 1565, there was a mass influx of poets, musicians and cultural artists from the kingdom.

According to the chronicles of the Hindu monastic institution, the Kanchi matha, the matha was temporarily transferred to Kumbakonam in the 1780s following an invasion of Kanchipuram by Hyder Ali of Mysore. When Tipu Sultan invaded the east coast of South India in 1784, Kumbakonam bore the brunt of his invasion. The produce fell sharply and the economy collapsed.Kumbakonam did not recover from the calamity till the beginning of the 19th century. 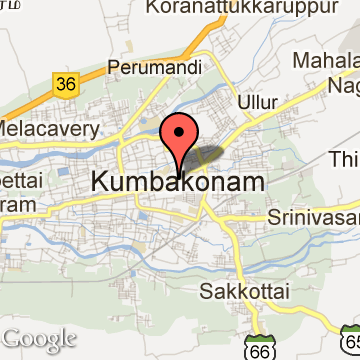