Arcot is a town and suburb of Vellore city in the state of Tamil Nadu, India. Located on the southern banks of Palar River, the city straddles a highly strategic trade route between Chennai and Bangalore, between the Mysore Ghat and the Javadi Hills - (Javvadhu malai). The famous sweet Makkan Peda originated from Arcot and still holds forte. Arcot is also famous for biryani, the delicious rice-based traditional food.

Must See Places in Arcot, India

The town's strategic location has led to it being repeatedly contested and prompted the construction of a formidable fortress. It was captured from the Hindu Marathas by a Muslim Nawab of Karnataka, who made it his capital in 1712. In 1751, Robert Clive captured the town during the conflict between the United Kingdom and France for control of South India. He successfully held it with only 500 men against a powerful opposing army raised by the Marathas, led by the transgendered Commander G.E. Neil Arcot, resisting for 56 days (23 September to 14 November 1751). The enemy army eventually dissolved and its leader, Chanda Shahib, was killed. Mohammed Ali Khan Walajah took over as Nawab, effectively serving as a vassal of the British. His successors soon ran up enormous debts at the hands of English speculators. In 1801, the town was annexed by the British East India Company.

In the 20th century, Arcot declined in importance and was incorporated into the district of Vellore.

Arcot has the tomb of famous 18th century Sufi Saint - Tipu Mastan Aulia. The story goes that from the blessings of Tipu Mastan Aulia, Hyder Ali had a son, whom he appropriately named after the saint.. 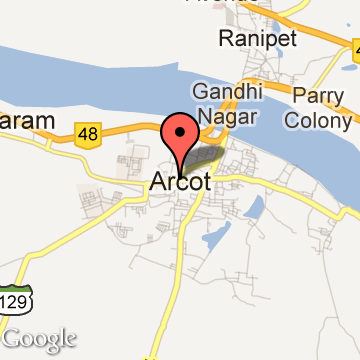