In today commodity-driven power-centric world, perhaps you know of Surat for its textiles or its diamonds, or for once being set to be one of the greatest cities in India, before its fall from glory. But behind the industry, beneath the rulers, lie the people. As an entry point for invading empires, the Mughals, the British, the industrialists, and the various trading communities that came with them, Surat took them all in its fold, becoming home to an eclectic ethnic and cultural mix. Leave behind the world of products and consumers and come meet the Surtis as fellow humans. Roam their streets, enjoy their spicy scrumptious food, and remember that we are simply visitors together on this planet.

Must See Places in Surat, India

Packed on the south bank of a sharp bend in the Tapi River, about 20 km before it drains into the Gulf of Cambay, Gujarat second largest city has always attracted traders from across the seas. It existed perhaps as early as 990 AD in the form of Suryapur, city of the Sun God. Parsis had settled in the area by the 12th century. In the 15th century after the nearby main city, Rander, was repeatedly attacked by the Portugese, Surat rose in importance apparently because of Malek Gopi, who had gained stature in government under the Gujarat Sultanate.  He convinced traders to settle in what is now known as Surat, developing it into a major trading center by 1514. The city was fortified by the Sultanate to protect against further invasion, though there are very few remains of the wall to be seen today.

In 1572, Emperor Akbar took control of Surat, which became a major Mughal trading port, as well as the point of departure by sea for Mecca-bound Muslim pilgrims. It is said that between the 17th and 18th centuries, there were ships docked in Surat flying 84 flags from around the world. Surat was one of India most prosperous cities, its spices and textiles attracting the British in 1612, the Dutch in 1616, and the French in 1664. When the Marathas invaded in the 17th century, while Mughal and Portugese factories were plundered, the British East India Company, under President George Oxenden, defended its factory successfully, in its first foothold on the subcontinent. The British continued to rule through independent puppet Nawabs from 1733, taking control openly in 1759. They gradually started shifting their weight to the port in Bombay for easier shipping

In spite of being built high on the bank to protect it from floods, the city was devastated by floods in 1822, 1837, and 1843, as well as by a great fire in 1837. Many Jains and Parsis fled to Bombay for better financial opportunities, and the city fell from its heights. It picked up its spirits when the new rail link in 1858 brought fresh industries and immigrants. Its spirits flagged again in 1994, when a premature diagnosis of a plague outbreak caused a brief scare and a resolve to clean up the city. In 2002 with communal riots, and in 2006 with severe floods, the city remains resilient, marching towards further modernization. Some call it the Tokyo of India, with its futuristic looking ring road flyover around the city, and its ultra-modern indoor stadium. 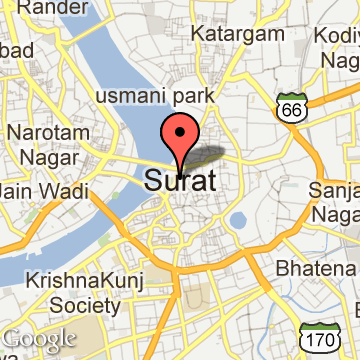