In the 21st century, most people travel by land in fast-moving buses or trains, and to reach destinations further away, many even travel in airplanes. Sometimes it is hard to remember that until the mid-1800s, overland travel was done by horse or bullock-cart. That human technological flight began only a century ago, and flying only became available to average travellers in the last 50 years. Until the middle of the 20th century, for the several millennia of human history that came before us, people voyaged on the seas. How many of us today have traveled on the open ocean?

If you don't feel ready to embark on a seabound voyage anytime soon, visiting a historical port town may at least bring you closer to understanding the way people and goods used to move around the planet (and 95% of world trade still does!). Here in Mandvi, the principal port of Kutch and of Gujarat for hundreds of years until the rise of Mumbai, visit the shipbuilding yards along the Rukmavati River where wooden ships are still built by hand. Stand at the Tower of Wagers, where wealthy shipowners would gather in May to scan the horizons, awaiting the return of the trading fleet from East Africa, and bet on whose would arrive first. Wander around the Vijay Vilas Palace and marvel at the items brought from far-off ports, and the architecture itself that shows a global awareness in its mixture of styles. Or recreate your favorite scene from Lagaan or Hum Dil De Chuke Sanam, both of which have scenes filmed at the palace.

Try Mandvi's famous local double rotis, also known as dabeli. Or, if you simply want a place sit at the ocean, let the salty breeze wash over you, and swim in the warm waters of the Arabian Sea, Mandvi's several quiet, clean beaches with flamingos and other migrant birds will surely do the trick.
Â

Must See Places in Mandvi, India

As per chronicles of Kutch Gurjar Kshatriyas - many clans of their community, especially, Gohil, Bhatti, Jethwa, Solanki, Rathod clans & also Visavaria Brahmins shifted to Mandvi in between 15th to 16th Century AD, from Dhaneti.[2]

The establishment of the town dates back to the late 16th century (1581 AD) and is attributed to the first Jadeja ruler of Kachchh, Rao Khengarji I.

In 18th century, the Mandvi merchants collectively owned a fleet of 400 vessels trading with East Africa, Malabar coast and the Persian Gulf. In the early 19th century, it was a major port of entry for the inland trade with Malwa, Marwar and Sindh.

Mandvi was at the junction of two famous trade routes the maritime spice trade-route and the desert camel caravan route, acting as an important trade center.

Mandvi was originally a fortified town having a fort wall of about 8 m high and 1.2 m wide stone masonry. The fort had several gateways and 25 bastions; but at present, most of the wall has disappeared. The bastion on the southwest is largest and acts as a lighthouse.

In the heyday of maritime trade, before the arrival of steamboats, Mandvi was a rich and prosperous town, earning four times more revenue from export than import. It was a profit-making center of the Kutch state, surpassing the capital city of Bhuj in terms of wealth. Dr.Manubhai Pandhi, a local social leader, recorded shipbuilding art and collected old documents which is treasured now in Prince of Wales Museum (www.bombaymuseum.org ) in Mumbai.

As most of the top ports of India were controlled by Europeans, especially the Portuguese, even the Mughals held the Maharaos of Kachchh in high esteem, as they needed the port of Mandvi for exports, imports and also for pilgrimages to Mecca.

In decade of 1960, the famous Dabeli is said to be have been invented here by Keshavji Gabha Chudasama (Malam). 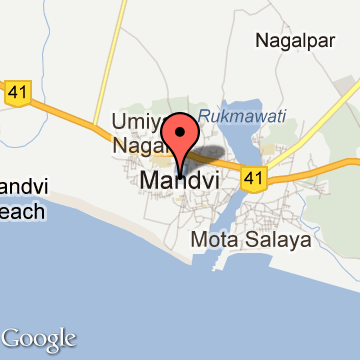