Gandhinagar, Gujarat's new capital city, lies on the west bank of the Sabarmati River, about 464 km away from Mumbai, the financial capital of India.

Thirty sectors, into which the city has been divided, stretch around the central Government complex. Each sector has its own shopping and community center, primary school, health center, government and private housing. There is a provision for of parks, extensive planting and a recreational area along the river giving the city a green garden-city atmosphere.

During the 13th century, the Shertha town was ruled by King Pethasinh of Pethapur. After his death, this land was used by the Sultanate of Patan as a battle ground. Sultan Ahmed Shah moved his capital from Patan to a newly built city of Ahmedabad. After Indian Independence, the erstwhile state of Bombay was divided into two states, namely Gujarat and Maharashtra, on 1st May 1960.

There has been a rapid growth and development in Gandhinagar since the 1980s. Apart from being the main administrative centre, the city has been slowly turning into a prime trade centre. Some of the famous electronic industries are established near Gandhinagar, along with co-operative societies, hotels and private buildings.

The city has an average elevation of about 81 metres and covers north-central-east Gujarat. Gandhinagar usually experiences a dry, hot climate and the south-west monsoon brings rainfall to the city from mid-June through mid-September. October to January is the best season to visit Gandhinagar.


Must See Places in Gandhinagar, India

In the 13th century, King Pethasinh of Pethapur, ruled over Shertha town. After the death of Pethasinh, the Sultanate of Patan used this land as battle ground. Sultan Ahmed Shah decided to move his capital from Patan to a new city, and built Ahmedabad. In 1960, Bombay state was split in two different states, Gujarat and Maharashtra. Ahmedabad became capital of Gujarat, and a new capital city was to be built on land which was once part of Pethapur state. 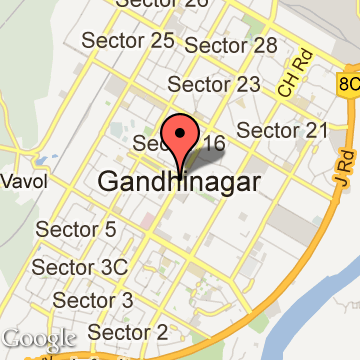