If you are braced to taste the mystifying paradox that India can serve up, than a visit to its megacity, Ahmedabad, comes as a prescription. Nestled in the heart of Gujarat, this zesty city provides one with a generous buffet of stimulation that swears to enliven all the five senses. A day here is like living through an enigmatic and passionate dance between the old and the contemporary, the virtuous and the ruthless, the peaceful and the chaotic, the artistic and the crude, the spiritual and the material.

But these very opposites often carry many visitors to such thresholds, that after a point, they find themselves immersed in the innate spirit of this enchanting place. Many who came here have never left. It is not because this city is perfect. Far from it. But it is because this city lives from the heart and one can feel it. If you can scratch through the surface of the smog, than you'll begin to experience its raw aesthetic energy and irrepressible spirit.

One end the noise of industrial growth and readily sprouting malls will amaze you and on the other end the serenity of the Gandhi ashram on the banks of the Sabarmati river will calm you. The elite educational institutions might impress you, and the unbreakable spirit and hospitality of the people residing at the grassroots might humble you. The traffic will flummox you, but hopefully the art and culture will refresh you.

Must See Places in Ahmedabad, India

Ahmedabad was the largest city in terms of area within the subcontinent before the arrival of the British and the setting of the Madras and Calcutta Presidency.

The area around Ahmedabad was ruled by a Bhil king around the 11th century and was known as Ashapalli or Ashaval. The Solanki ruler of Patan, Karandev I, defeated the Bhil king in a war and established his kingdom, Karnavati at what is known as Maninagar today. The Solanki rule retained its hold until the 13th century, after which the reigns fell in the hands of the Vaghela dynasty of Dholka. Towards the end of the thirteenth century, all of Gujarat was captured by the Sultanate of Delhi and the Muzaffarid dynasty ruled here.

There is a well known legend, that around 1411 Sultan Ahmed Shah was standing by the Sabarmati river when the unusual sight of a hare chasing a ferocious dog caught his attention. He was impressed by the influence of this land that cultivated fearlessness in its people and so he decided to establish his capital in this forest area and named it Ahmedabad. The construction had begun with the fort wall housing the intricately designed city within. The wall was consecrated at four points by four Ahmedabad, Sheikh Ahmed Khattu, Ganj Baksh, Kazi Ahmed, Malek Ahmed and Sutan Ahmed Shah.The construction was completed in 1417 AD. 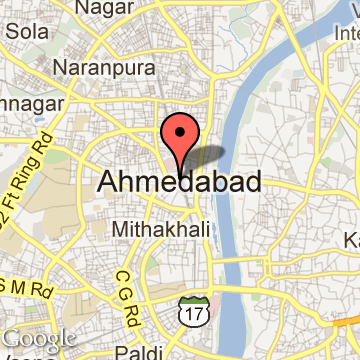