Welcome to the oyster of India. The pearl that awaits you, formed over the ages, is not the perfectly round and smooth one on a string, painted in royal portraits, but a rough, bustling, noisy one. Layer after layer has been laid on what used to be a tiny fishing settlement: pearl fishing, in one of the largest fisheries in the world; bandhani, the traditional fabric dyeing technique; master silver artisans; a series of Jams or rulers, who brought prosperity, glory in the world of cricket, and a Nature Conservation Park; an overflow of holy places for worship of different faiths; and a crumbling old city full of stories.

At the center of the pearl city waits an island fort in a lake, where humans enjoying kulfi share space with flocks of birds enjoying the breeze. At the sea, where oil refineries quickly gobble up the coastline, waits the spectacular and heroic Marine National Park and Sanctuary, the last vestiges of protection from human expansion.

Must See Places in Jamnagar, India

Jamnagar was founded by Jam Rava Jadeja in 1540 A.D. as the capital of the Princely State of Nawanagar. Jamnagar, historically known as Nawanagar (the new town), was one of the most important princely states of the JADEJA's in the region of Saurashtra. According to Pauranik literature, Lord Krishna established his kingdom at Dwarka town in Jamnagar district, after migrating from Mathura and accordingly, it is to the Yadava race that the Jams of Nawanagar trace their ancestry.

According to bardic chronicles, impressed by Jam Lakhaji's role in at the siege of Pawagadh, Bahadurshah, the Emperor of Gujarat, bestowed 12 villages on him. As Jam Lakaji was going to take possession of his new fief, he was treacherously killed by his cousins, Tamachi Deda and Hamirji Jadeja. Jam Lakhajis son Jam Rawal escaped and on growing up, took vengeance of his father's murder in the same manner by killing Hamirji Jadeja.

Hamirji's two sons Khengarji and Sahibji fled to Delhi to pay obeisance to the mughal Emperor Humayun. During a lion hunt, the two brothers saved the Emperor from being killed by the lion. As a reward for their valour, an army was sent with them to regain their kingdom. When Jam Rawal heard of the two princes coming back to the Kutch with the imperial army, he started getting ready for the battle. On one night, he dreamt of the goddess Ashapura who told him that as he had broken an oath taken on her name about not killing Hamirji, even though, he was the person responsible for the death of his father. She had refrained from punishing him as he had at all other times honored her, but he was no longer to dwell in Kutch but cross the sea and reside in Kathiawar instead.

Jam Rawal and his entourage marched out of Kutch, attacked and killed King Tamachi the other conspirator in the killing of his father, and conquered the town of Dhrol and its dependencies. Jam Rawal bestowed the rule of Dhrol province to his brother Hardholji, who was later killed in battle, and the throne passed to his eldest son, Jasoji. Jam Rawal conquered parts of Saurashtra and formed his kingdom.

Once on a hunting trip on the land of present day Jamnagar, a hare was found to be brave enough to turn on the hunting dogs and putting them to flight. Deeply impressed by this, Jam Rawal thought that if this land can breed such hares, the men born here would be superior than other men, and accordingly made this place his capital. On the 7th day of the bright half of the month of Srawan, VS 1956 (August 1540 AD) on the banks of two rivers Rangmati and Nagmati, he lay the foundation of his new capital and named it Nawanagar (new town). Nawanagar eventually came to be known as Jamnagar meaning the town of the Jams. 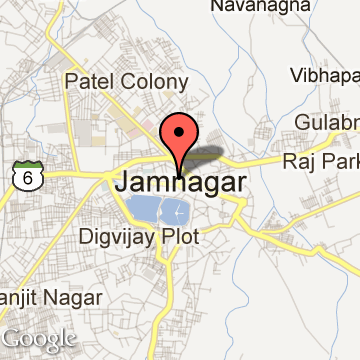