Wankaner The former princely state of Wankaner is located 53 km from Rajkot. Nestled round a bend on the River Machchhu hence its nomenclature  a river, Wankaner formed part of an area in Saurashtra caller Jhalawar due to the predominance of the Jhala Rajputs ruling there.

The Wankaner Royal Family known for their patronage of the arts had a personal interest in engineering and architecture, exemplified in the Ranjit Vilas Palace designed by His Highness Amarsinghji in the year 1907. This Palace built on a hilltop overlooking the town of Wankaner is an eclectic blend of various architectural styles. Gothic arches support oriental marble balconies, terraced porticos sport Doric and ionic columns and a seven storied clock tower capped with a Mughal dome. Franco-Italian window panes frame the exteriors overlooking magnificent grounds containing stables for thorough bred stallions and a fine collection of classic automobiles. The palace is occupied by the present royal family though sections have been converted into a museum showcasing a grand collection of armaments, stuffed animals, portraits and paintings, royal silver ware and exotic furniture.

Two palace guest houses, The Royal Residency and the Royal Oasis are now Heritage Hotels. The Royal Oasis is situated on the banks of the Machchhu Lake amidst a serene orchard of leafy trees, the warbling of birds and an atmosphere of cool, meditative calm. It also houses a grand indoor pool in the Art Deco style with an early twentieth century step-well located near the palace grounds. Wankaner reflects the hospitality and grandeur of old Kathiawar

The town of Gondal is located in the Indian state of Gujarat. There are many important destinations that you can visit in Gondal, as this is a popular tourist destination among the locals as well as foreigners. Gondal is one of the remaining few towns that hold the real cultural heritage of the Rajput kings and early rulers in Gujarat. While visiting the town of Gondal, you should visit the Riverside Palace, which is a famous landmark in the town. This palace was built by Maharaja Bhagwat Sinhji in 1875, and this structure still stands tall, having aced the test of time.

The interiors are beautifully decorated with enchanting artwork, and the furnishings are one of their kind and unique. This is a must visit destination in Gondal. You can also visit the Oxford Palace, also called as the Huzoor Palace, during your trip to Gondal. This magnificent palace is located among gardens of fruit bearing trees.

Gondal also serves as the base for visiting many other interesting places in Gujarat. You can visit the Girnar peak, which stands 3660 feet high. The nearby town of Dhorai also houses a huge palace that is called the Dabargadh Palace. The town of Rajkot is also an interesting tourist destination located near Gondal.

Must See Places in Gondal, India 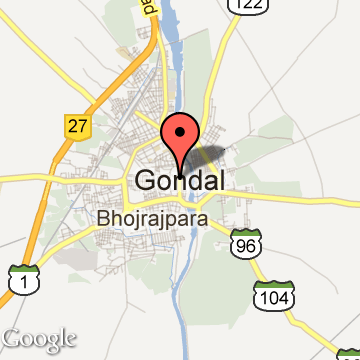