The hilly district of Malappuram falls among the northern districts in the state of Kerala. Closely bordered by the mountain ranges of the Western Ghats on its east, and flanked by the Arabian Sea on the West, Malappuram has an eventful history with the Zamorins of Kozhikode ruling the region for a significant period in the past. The district has also witnessed several local uprisings against the British rule, and was once a prominent center for Hindu-Vedic learning and Islamic philosophy. Historic monuments, natural attractions, ritual art forms, ethnic cuisine and age-old traditions make Malappuram a unique destination for travelers.

The District Tourism Promotion Council (DTPC) is set up with the purpose of fully exploiting the tourism potential of the State through sustained efforts by co-ordinating various Government departments, voluntary agencies and others interested in travel and tourism.

Malappuram  is a city in the southern Indian state of Kerala, with a core urban population (in 2011) of 101,330 inhabitants spread over an area of 33.61 km2. The first municipality in the district formed in 1970, Malappuram serves as the administrative headquarters of Malappuram district. Divided into 40 electoral wards, city has a density of population of 2,083 per km2. As per the 2011 census Malappuram Urban Agglomeration is the fourth largest urban agglomeration in Kerala state with a total population of 1,698,645. Malappuram, in malayalam, means 'Place atop the hills'. Malappuram is situated 50 km southeast of Kozhikode, 90 km northwest of Palakkad. and 140 km northwest of Coimbatore.

Malappuram (literally, a land a tops hills) is situated 50 kms south-east of Kozhikode, bounded by the Nilgiri Hills in the east, the Arabian sea in the west and Thrissur and Palakkad districts in the south. Malappuram is enriched by three great rivers flowing through it - the Chaliyar, the Kadalundi and the Bharathappuzha.

Malappuram has a rich and eventful history. It was the military headquarters of the Zamorins of Kozhikode since ancient times. This district was the venue for many of the Mappila revolts (uprisings against the British East India Company in Kerala) between 1792 and 1921. It was a famous centre for Hindu - Vedic learning and Islamic philosophy and a place of cultural heritage.

The temples and mosques of this district are well known for their spectacular festivals.

Must See Places in Malappuram, India 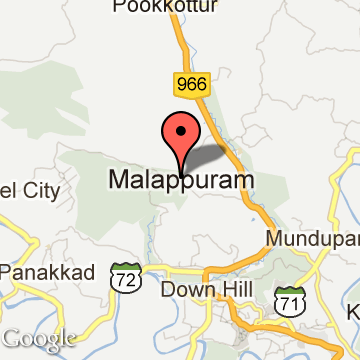