Kollam or Quilon, an old seaport town on the Malabar Coast, had a sustained commercial reputation from the days of the Phoenicians and the Romans. A famous port of international spice trade in ancient India, the present day Kollam is famous for its varied modern industries including cashew nut processing and research, fisheries, etc.

Kollam shares fame with Pattanam (Muziris) as an ancient seaport on the Malabar Coast of India from the early centuries of Before the Christian era.

Kollam had a sustained commercial reputation from the days of the Phoenicians and Ancient Rome. Pliny the Elder (23–79 AD) mentions Greek ships anchored at Muziris and Nelcynda. There was also a land route over the Western Ghats. Spices, pearls, diamonds, and silk were exported to Egypt and Rome from these ports. Pearls and diamonds came to Chera Kingdom from Ceylon and the southeastern coast of India, then known as the Pandyan kingdom.

Cosmas Indicopleustes, a Greek Nestorian sailor, in his book the Christian Topography who visited the Malabar coast in 550 CE, mentions an enclave of Christian believers in Male (Chera Kingdom). He wrote, "In the island of Tabropane (Ceylon), there is a church of Christians, and clerics and faithful. Likewise at Male, where the pepper grows and in the farming community of Kalliana (Kalliankal at Nillackal) there is also a bishop concecrated in Persia in accordance with the Nicea sunnahadose of 325 AD ." The Nestorian Patriarch Jesujabus, who died in 660 CE, mentions Kollam in his letter to Simon, Metropolitan of Persia.

In 825 CE, the Nestorian monks Mar Abo and Mar Proth arrived in Kollam on the invitation of the ruler of the Venad-a feudatory under the Chera kingdom.The two monks received a Royal sanction called "Tarsish-a-palli" near "Korukenikollam" from Chera ruler Rajashekara varman Ayyanadikal Thiruvadikal, as described on the Tharisapalli plates. Special privileges were given to the Ezhavas in the Tarisapalli sasanam. The two monks were instrumental in founding Christian churches with Syrian liturgy in the Malabar coast area distinct from ancient Hinduism. Mar Abo lived his last years at Thevalakkara, and his remains were buried there in the Martha Mariam Orthodox Church. 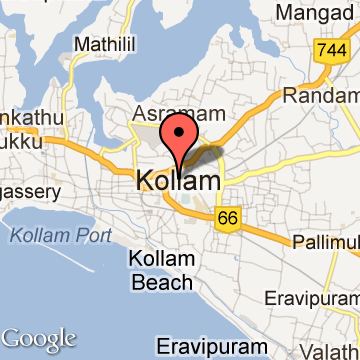