Chikmagalur is a district situated in south-western part of Karnataka, India. It was in Chikmagalur that coffee was first cultivated in India. Rivers like Tunga and Bhadra have their sources in the mountains here which are part of the Western Ghats. Chikmagalur district also contains Mullayanagiri, the highest peak in Karnataka.

Carved against a mountainous canvas this beautiful Malnad district is full of surprises. The hill stations, the waterfalls, the historical temples and the wildlife sanctuaries make this region a tourist paradise. It is alternatively spelled Chikkamagaluru, which literally means ‘The town of the younger daughter’ in the native Kannada language.

Must See Places in Chikmagalur, India

Chickmagalur district was called Kadur district until 1947. It is situated roughly in the south-western part of Karnataka state. A large area of this district is 'malnad', a largely forested hilly region of heavy rainfall. The first coffee plant was grown at Chikmagalur. It was brought from West Asia by Baba Budan giri, whose shrine is on top of the hills in the region.

Chikmagalur City takes its name from the word "Chikkamagala Uru" which literally means younger daughter's town (in Kannada). It is said to have been given as a dowry to the younger daughter of Rukmangada, the legendary chief of Sakrepatna. Another part of the town bestowed on the elder daughter is known as Hiremagalur.

Some old inscriptions reveals that these two places were known as Kiriya-muguli and Piriya-muguli. In a fertile valley south of the Baba-Budan hill range is the headquarters town of the district. It is a centre of education, trade and commerce.

The town enjoys a salubrious climate and has venerated monuments of all religions: Kodandarama temple a synthesis of Hoysala and Dravidian styles of architecture, Jamia Mosque and the new St. Joseph's Cathedral with an attractive shell-shaped portico. Hiremagalur, which is now part of Chickmagalaur town, has an Ishwara temple with a 1.22 metre high curious rotund figure of Jademuni. The temple has a Yoopastambha supposed to be installed by King Janamejaya during his serpent sacrifice. There is also a Parashurama temple and a Kali shrine. 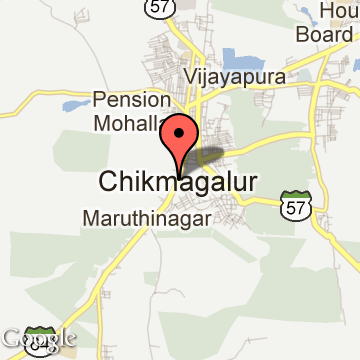